Cameron Smith needed just one tournament this year to reach his goal of cracking the top 10 in the world rankings, and with that objective checked off his to-do list he is in no hurry to plot his next move.

The Australian vaulted to a career-high 10th in the rankings from 21st after his record-setting victory at last week’s Tournament of Champions at Kapalua. His 34 under par total was the best under-par score in a four-round PGA Tour event. 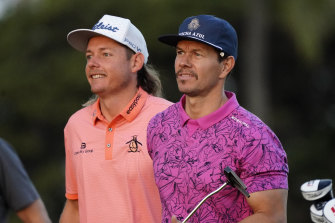 “I’ve never really wanted to expect anything of myself, I’ve always been a process kind of guy,” Smith said on Wednesday at Waialae Country Club in Honolulu before this week’s Sony Open. “I feel like if I tick all the boxes I’m going to play some good golf.”

Smith, who won the Sony Open in 2020, joined Jim Furyk, Ernie Els, Vijay Singh, Zach Johnson and Justin Thomas as the only players to win both stops on the PGA Tour’s Hawaii swing.

Smith, a four-time tour winner, acknowledged he will have to reassess his goals after a solid start to 2022 but he is in no hurry.

“I haven’t had a lot of time to obviously process it at the moment,” Smith said. “Maybe in a week or two, I’ll be able to sit down and really go through some stuff and set some more goals.”

Smith rode a steady driver to victory last week and admitted that while he spent time during the off season addressing technical issues he kept things to a minimum.

“I’m not really the hardest practiser in the world, so I used to get through my wedges and irons and then be like, oh, I’m all right, I’ll just go home and hit one or two drives,” Smith said.

The Brisbane native will play the first two rounds with defending champion Kevin Na and American world No.32 Talor Gooch.