AFLW Grand Final day has arrived! Follow all the action in our live blog, including the latest on tickets and Adelaide’s big call on Chelsea Randall’s replacement

Lions and Crows to meet in AFLW GF

Crows’ Irish recruit Ailish Considine has been called up to play her first AFLW game in five weeks in Saturday’s Grand Final against Brisbane.

The 28-year-old utility’s inclusion is the only change to the Adelaide side that beat Melbourne by 18 points in last weekend’s preliminary final.

She replaces captain Chelsea Randall who has been sidelined with concussion.

JOIN OUR LIVE BLOG OF ALL THE ACTION, COLOUR AND HIGHLIGHTS THROUGHOUT THE DAY BELOW

Considine is no stranger to the grand final stage, having played in Adelaide’s 2019 premiership win at Adelaide Oval, kicking a goal in the Crows’ 45-point thumping of Carlton.

The first-ever Irish player – male or female – to play in Adelaide’s tricolours, Considine has played 15 AFLW games across three seasons. Adelaide head coach Matthew Clarke said trying to replace Randall had made for difficult discussions at the selection table, but was helped by the fact that he had seven fit players to choose from, with only Nikki Gore (broken ankle), Jessica Sedunary (hamstring) and Randall (concussion) unavailable.

“All of the players who have been vying for the last spot are worthy and because Chels plays everywhere, you can make an argument for many people,” he said.

“That’s been one of the tough ones, but the strength of the group has been the attitude of the whole squad and the input of those who haven’t necessarily played as many games as others, the way that they’ve embraced their role and contributed has been outstanding.

“It was a really tough call but we’re confident that whomever steps in will play their role and help us hopefully get over the top (of the Lions).”

Brisbane and Adelaide last played each other in Round 4, with the Crows coming out two-goal victors, largely thanks to a gargantuan effort from former captain Erin Phillips who had 21 touches and kicked four goals.

“That was nearly the best I’d seen her play…key moment stuff that Erin tends to do,” Starcevich said.

Clarke agreed that Phillips’ Round 4 game had been her standout performance of 2021.

“(The last time we played), it was a two-goal win and a pretty good player had a pretty good day out, so clearly both teams will have grown from that time of the season and I imagine tomorrow’s going to be a cracking contest.

“Hopefully it will be one of the great grand finals we’ll see.”

Brisbane has named an unchanged side for the decider.

RELATED: LIONS OUT FOR REVENGE FOR 2017

MORE: HOW ERIN PHILLIPS BOUNCED BACK $10 for adults, kids under 18 free. Tickets must be purchased from Ticketek.

Fans must wear masks when entering Adelaide Oval and when moving around the venue. 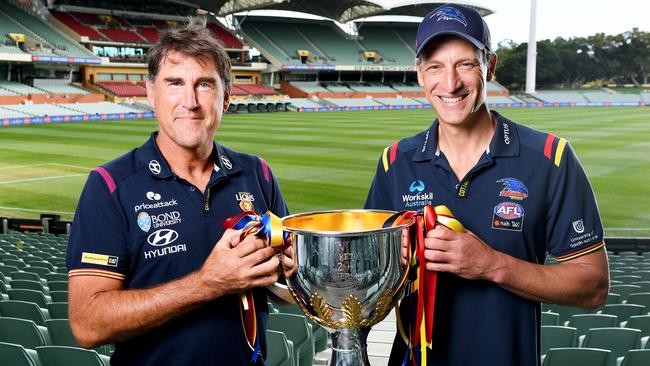