Home » Boxing » ‘I wasn’t able to chew’: The punch on granddad’s jaw that put toddler Tszyu on path to top

Tim Tszyu is throwing punches at his grandfather Boris.

Boris is swaying out of the way, throwing back the occasional jab, but there’s not too much behind it because, after all, Tim is only three years old. 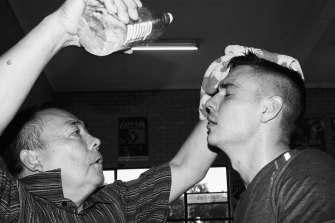 After trading away for what seems an eternity, the shadow-boxing session is over. At least it is in Boris’ mind. The old man lowers his guard.

This is a costly mistake in the Tszyu household.

“I still remember this,” Boris recalled.

“I’m standing on my knees and I’m play-boxing with Tim.

“My attention is diverted for a moment and you’re not expecting it, you’re not looking and you’ve got your mouth open.

Boris pauses to slap his right fist into his left hand to replicate the sound. A grin spreads across his face.

“I wasn’t able to chew,” he said. “Time has gone by, but that memory remains.”

Tim is too young to remember any of this. But he has heard the story countless times from his father, Kostya. The way the boxing legend tells it, Tim hit Boris with such ferocity that he dislocated his jaw.

“My dad told me the story, I just got him in the right spot, I guess. I knew how to throw punches.

“It was always boxing, I had to test it out on someone. [Grandad] would have gone ‘Yep, boxing is for him. He is in the right family’.”

Indeed, Tim Tszyu is on the cusp of becoming a world champion. On Wednesday night, he will fight compatriot Dennis “The Hurricane” Hogan, whose only losses in a stellar career have come during two world title fights. Should Tszyu prevail in Newcastle, a town Kostya was undefeated in during seven bouts there, he could be in a position to earn a championship belt in his next appearance in the ring.

He gives my life meaning.

On the eve of the Hogan bout, Boris Tszyu sat down with the Herald. Boris’ English is about as limited as your correspondent’s command of Russian, but there was enough common ground for the patriarch of the family to conduct a rare interview.

Boris was a constant throughout son Kostya’s career and he has now devoted himself to guiding Tim through his own journey to the top.

For Tim, the family’s Rockdale gym is his second home. Boris accompanies him to every training session and records the details in a diary. He did the same thing during Kostya’s career, providing a benchmark to work against. 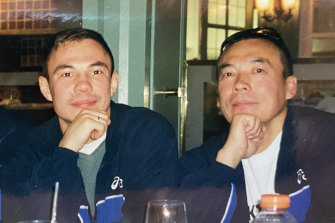 You would think Tim would be sick of the constant comparisons to his father. They are made daily. In some disciplines – including running, squats, rounds sparred and skipping drills – the youngster comes out on top.

“With Kostya, there were whole reams, everything was written down,” Boris said.

“Now, with Tim, I continue the same routine. Every training session is diarised and it all remains with me.”

It would appear Tim was destined to follow in his father’s footsteps. Having landed his first right cross at the age of three and accepted the same spartan lifestyle of the boxing hall of famer, the ring appeared his calling.

Boris, however, sees it differently.

“Just like his dad? You never think that,” Boris said.

“You just think it’s about going about your own business. No expectations even come into your head.

“Everything happens of its own accord, you do life on your own terms.

“So many years I spent with Kostya, so long we trained.

My grandpa is everywhere for me, he’s everything.

“The only thing we focused on was boxing. All of our energy and discipline was centred only on boxing.”

Tim briefly fell out of love with the sport, booked into university and tried to carve out a very different path. However, the call of the fight game couldn’t be ignored.

“Now it is the same with Tim. You have to be totally dedicated, at all times,” Boris said.

“He has grown up and been trained in a boxing family. From such an age he has known only boxing gloves, punching bags. 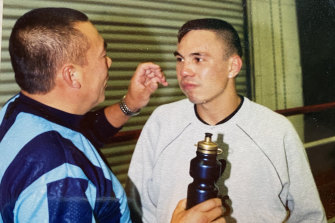 “He tried other things, [playing] football [as a child] and the like, but it wasn’t to be.”

Kostya remarried and relocated to Russia almost 15 years ago. They remain close, but Tim describes Boris as “the father figure in my life”.

“My grandpa is everywhere for me, he’s everything,” Tim said.

“We’re on the phone three or four times to each other, we see each other every day. He’s the man, he’s the bread and butter in the whole thing.

“He’s called the Godfather here in the house, Dyeda [granddad in Russian].

“He’s the oldest man, the one we all look up to. We have enormous respect for him. Half the reason I do it is because of him.”

Boris Tszyu is now well into his seventies. Whenever his birthday rolls around, Tim asks what he wants for a present. The response is always the same: “Give me a victory, give me a good performance”.

“He is living his life through me and I do all of this for him as well.

“I want to bring [a world title] back to my grandpa to make him happy, put it on his wall.

“That’s the reason why I do these things.”