Home » Boxing » ‘Don’t like him’: The sledge that set off the Gallen-SBW feud

After disposing of Justin Hodges in his farewell fight, Paul Gallen has unloaded on Sonny Bill Williams, revealing the sledge that sparked a feud that will never be settled in the ring.

Gallen ended his illustrious sporting career with a unanimous points decision over Hodges in their rematch, with the judges scoring it 60-54, 60-54 and 59-55 in his favour. The former Cronulla captain said that would be his final bout, despite the fact the public never got to witness the long-anticipated clash with Williams.

Gallen told the Herald last year that Williams would wait until he was over the hill before accepting his challenge and said that history has proven him right. While there has been some good-natured banter between the pair as they talked up a potential fight, Gallen said one comment the cross-code star made forever ruined their relationship.

“I have never had an issue with Sonny Bill Williams, I’ve always liked him, always respected him,” Gallen said.

“He is always waiting for someone to get too old before he fights them and that’s what he’s waiting for with me. I’m not going to give him that chance now that I’m past my best.

“He’s done it with all his opponents and he got caught out recently. 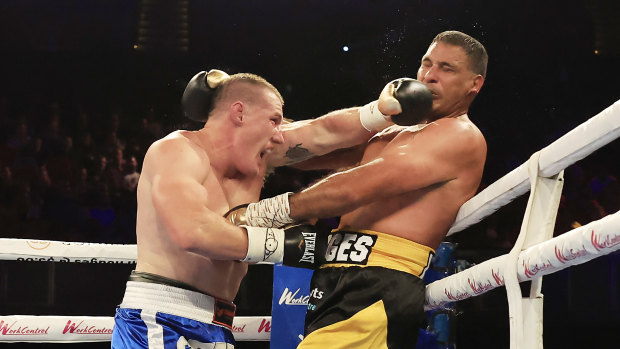 Paul Gallen bows out a winner.Credit:Getty

“I’m disappointed we didn’t do it. We should have fought twice; four or five years ago when I was calling him out and whoever lost could have said we were footy players back then, we’re professional boxers [now] so let’s do it again. And if it was one-all we could do a huge decider and if someone won 2-1 then full credit to that person.

“We never had much beef along the way, I’ve just always said he was scared to fight me. He called me out saying [he wanted] a 60-40 contract, but we never had beef.

“And then he came out a couple of months ago and said ‘He’s just not a good person’.

“That was the end of it for me. Who the f— is he to judge me as a person? That was the worst thing [he could say].

“That was the end of it. I came out, said what I thought about him and there’s no relationship there. I don’t want there to be, I don’t care.”

Gallen said the pub debate about who would win when both were in their prime would remain just that.

“I’ve never been that person to say ‘I could of beat him, should have beat him’. I don’t care,” Gallen said.

“But it ended when that comment came. I went back twice as hard and told everyone what I thought of him. 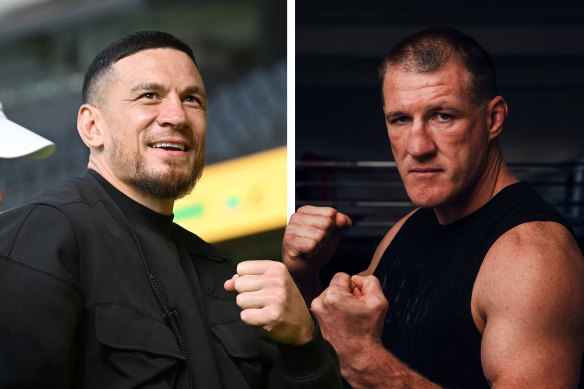 “I don’t like him. Someone asked if I would keep fighting if I was Sonny Bill Williams. I would. He’s 37 years of age – look at what I’ve done since I retired [from football] at 38. Look at the blokes I fought, the money I made.

“He’s still got it. He can do it. He got beaten by Mark Hunt, who is a legend, one of the hardest punchers in the world.

Gallen was for once on the undercard of a No Limit boxing promotion. The main event was Michael Zerafa, who outpointed Danilo Creati 98-93, 99-91 and 98-92.

Zerafa admitted it was a scrappy performance after taking the fight on four weeks’ notice and dropping 10 kilograms to make the middleweight limit. However, he was adamant that he was on track for career-making fights against Gennady Golovkin and Tim Tszyu in the near future.

“Tim Tszyu will bring the best out of me,” he said.

“Once Tim Tszyu gets flattened and bowled over by [undisputed champion Jermell] Charlo, where is he going to go? He will come back to Sydney and he will need an opponent.

“Who is he going to fight? My name will be back in his mouth.”