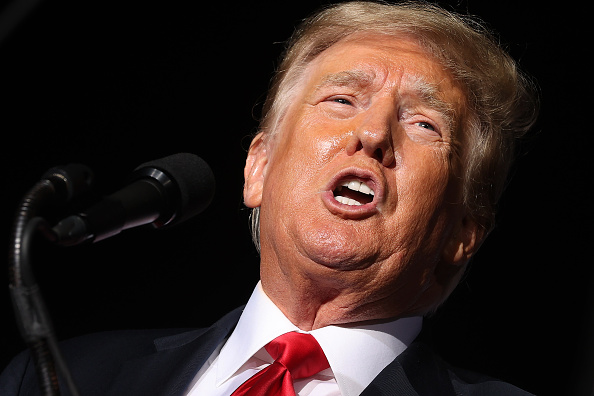 The 45th president of the United States will ‘host and commentate’ the Triller Fight Club main event on Saturday in Florida which sees former heavyweight champion Holyfield return to the ring after an 11-year retirement.

Another boxing legend in Oscar de la Hoya was originally scheduled to headline the card against Belfort, but was forced to withdraw after testing positive for Covid.

Trump will be joined by his son Donald Trump Jr in the commentary booth.

Viewers will have the option of watching the regular broadcast or the special Trump ‘gamecast’.

‘I love great fighters and great fights,’ Trump said upon the announcement.

‘I look forward to seeing both this Saturday night and sharing my thoughts ringside. You won’t want to miss this special event.’

Trump and his son will provide commentary on the entire card which will also include British boxing great David Haye.

The former cruiserweight and heavyweight world champion will fight for the first time since 2018 when he takes on his friend Joe Fournier.

PPV service Triller hosted Mike Tyson vs Roy Jones Jr last November as the two boxing greats came out of retirement for an exhibition bout with Snoop Dogg on hand to provide commentary that night.