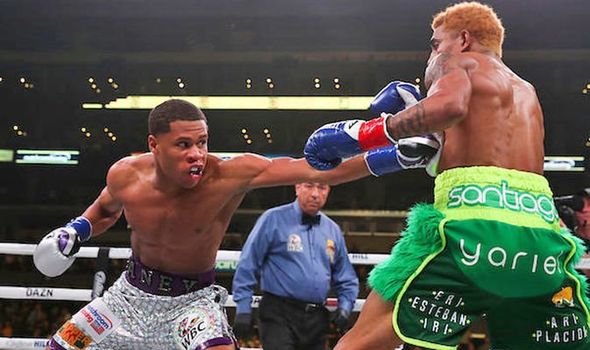 From the opening seconds Haney showed just how neat he could be, coming in and out when needed, landing hard, crisp shots to Santiago’s bright-coloured dome.

Donned in purple and silver, Haney’s defence and balance was also on show, just as it was in wins over Antonio Moran and Zaur Abudallaev this year.

The newly-anointed WBC lightweight world champion made it clear before the fight that while he appreciate his newfound gold, he wanted to win it in the ring.

So putting gin the perfect performance against Santiago was much-desired. The second round saw Haney continue more of the same work, always careful and always mindful of what his opponent might have thrown back.

Haney worked the jab to the body will full effect and in the third, despite Santiago’s fearfulness, Haney hit some of his sharpest shots of the night.

Santiago proved himself to be a live dog during the third and came into the fourth with his long, gangly arms in the face of Haney in a southpaw stance.

Body attack was the order of the day for Haney in the fifth, but he also began go land some nice left hooks and looked to assert his heavy jab.

And the shot that Haney was looking for came as Santiago missed with a shot of his own. The American landed clean to the body before a spiteful combo up top put Santiago down to the ground. 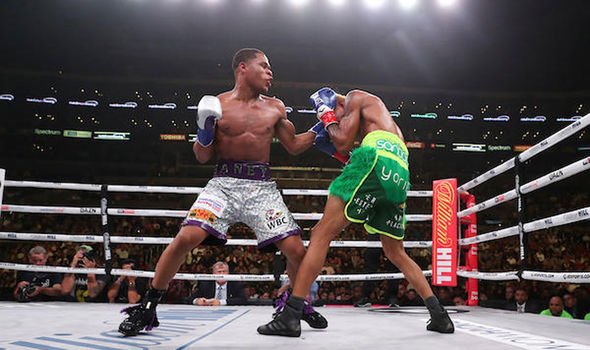 As the round came to an end, Santiago was on bandy legs and the sixth was where it looked like it would unravel for the flamboyant lightweight. He held on, though.

Haney brought it back to his jab once Santiago recovered but the intent to land, and land big, was still there.

Haney’s father and trainer, Bill, gave clear and concise instructions in the corner as the eighth round swung by – don’t rush in and take the time needed to find openings.

Santiago, in his corner, though, could be seen breathing heavily, huffing and puffing, before heading out for the ninth round.

By the 10th, it had become clear that Santiago was proving to be tricky and awkward for Haney, who surely kicked himself that he couldn’t finish proceedings in the fifth.

Haney tried his patented uppercuts toward the end of the round but Santiago began to hold, much to the frustration of his champion opponent.

The 11th and 12th went by without much trouble for both fighters but Haney found it hard to get the stoppage he wanted.

Unfortunately for him, he would have to listen to David Diamante read out scores of 120-107 three times, rather than ‘by knockout’. But onto the next one for ‘The Dream’ Haney.

Soccer
Football: Sancho needs to be 'more grown up', says Dortmund teammate Can after haircut row

Loftus-Cheek returns with a goal as Chelsea hold squad friendly