Melbourne United fought through jet-lag and indifferent form to go the distance with Perth, but they couldn't overcome the Bryce Cotton factor.

The Wildcats import has developed a habit of nailing big shots and he did it once again at Melbourne Arena on Sunday, hitting a pull-up jump shot off the backboard to give his club a 95-93 win. 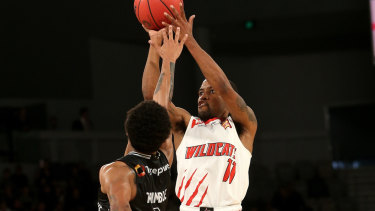 Melbourne remain winless after three games, all three have been by less than three points.

Cotton (27 points) only had seven points at half time but he fired up after the break with 12 points in the third term and then eight in the final term including his game-winner which came with four seconds to play. Melbourne’s Melo Trimble then came agonisingly close to snatching a win for United after racing up the court to release a three-point effort which bounced out off the rim.

Trimble (21 points, five assists) was exceptional for Melbourne as was skipper Chris Goulding (17 points) and Shawn Long (19 points, 12 rebounds). The trio all fired throughout the game, including in the last term, but their efforts went unrewarded after another disappointing loss.

Cotton topped off his devastating final term by giving the Melbourne bench a farewell wave after the buzzer, although he claimed post game he didn't know what he did. 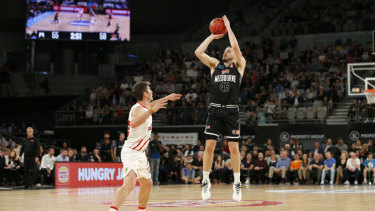 From a distance: Chris Goulding sends off a shot for Melbourne United.Credit:Getty Images

"When we set the screen I was trying to read the defence and see if they were going to trap, in case I had to pass the ball early," Cotton said.

"But when I saw they didn't, I just wanted to take my time and try to get a good shot.

"I can't even remember, you will have to check the film."

Melbourne coach Dean Vickerman praised his side for their resillience, and for not using their travel fatigue as an excuse. He also revealed Mitch McCarron and Shea Ili both struggled with cramp late in the game. 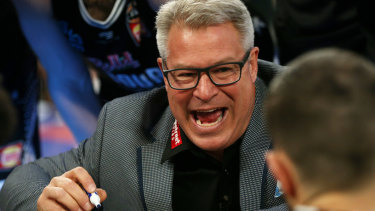 On message: United coach Dean Vickerman communicates plays during a time-out against Perth.Credit:AAP

But he said the side must find a way to finish off close games.

"It's too similar to what we have seen in every game so far,' Vickerman said.

"The Wildcats' plays were pretty well defended but that’s the end of the game. We've put ourselves in a position to win, but haven’t built up a significant enough lead.

"We talk about winning habits, and we are closer in that area, but we are not quite there yet.

"I was proud of the boys, the way they bounced off the plane. They gave everything today and we just weren't good enough but out of anyone in the league we know we are a chance to get better." 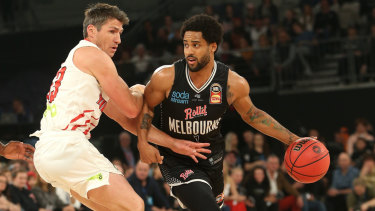 Perth's Terrico White again made some big shots in the second half to finish with 19 points. The import continued his impressive run, after shooting the game winner in Perth in round one and was in similarly excellent form in last year’s grand final series.

Goulding showed no signs of jet-lag after Melbourne’s two-game NBA pre-season swing as he nailed three three-pointers in the opening term to give his side an early 11-3 lead.

The advantage didn’t last as Mitch Norton bounced into the game and hit some instant baskets for Perth. After their loss to Cairns on Friday night, the Wildcats knew their bench had to lift and Norton led the charge, converting two three-point plays.

Melbourne’s 22-19 lead at quarter time didn’t hold as the two sides traded baskets, but neither side could control their own defensive glass and both racked up double-figure offensive rebound counts by half time.

Tohi Smith-Milner gave Melbourne a boost off the bench with some timely baskets and the return of Dave Barlow from a thumb injury made their offence look much more effective, as they held a 44-42 lead at half time.

Melbourne should have known Bryce Cotton would fire after half-time considering he only had seven points at the main break, and the NBA import quickly took over in the third term knocking down 12 points and setting his side on track for the win up 69-65 heading into the fourth quarter.

But Trimble had a four-point play early in the last and Barlow started pulling in some key defensive rebounds. Melbourne looked a chance as Goulding nailed a three on Cotton and then came up with a loose ball than ended with Mitch McCarron finishing at the rim to put them up 83-75 with five minutes to play.

Perth won their title at Melbourne Arena last season and they were never going to give in easy, so once again they roared back in the final minutes and with 32 seconds to play found Nick Kay for a lay-up and a 93-91 lead.

Trimble tied it at 93-93 with a lay-up but then Cotton made his winner and that was the finish.