After arriving in Perth from Europe this week, new South East Melbourne Phoenix Devondrick Walker embraced the summer sun and took a walk around town in his sunglasses.

He will take the same happy wanderer mindset into his eight-game stint with the Phoenix.

The 27 year old, 196-centimetre American swingman will suit up for the Phoenix against Perth Wildcats in Perth on Friday night. In 2017, Walker was meant to play for the Wildcats but a foot injury in pre-season saw them part ways before he could play a game.

Walker flew from France to Germany to Singapore and then Perth where he was expecting to link up with his Phoenix teammates on Thursday night, it's unlikely he will get more than the game-day shoot-around with the team before suiting up. 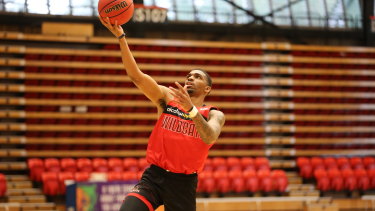 The seventh-placed Phoenix (9-11 win-loss) are still in the finals race but are desperately in need of wins to keep pace, they will hand Walker a baptism of fire this round as they follow the Perth game with a clash against top-team Sydney Kings in Sydney on Sunday.

"It's been crazy but the pro-athlete life is always like that and it gives you a thrill," Walker told The Age from Perth.

"Strangely the flight over wasn't bad. I slept through the first leg which was about 12 hours and then watched some movies. Usually you think it will be a pretty tough but it wasn't."

Walker loved his short time in Australia in 2017 and has had instructions with his agent ever since to find a way for him to return, now the opportunity has arrived.

Phoenix star Mitch Creek tipped Walker would make a good impression but may not play a big role this round. The pair played together in the NBA summer league with the Utah Jazz in 2017.

"Devondrick's the kind of guy who's going to be light-hearted and come in with the right mentality on the court, but as soon as he gets off the court he'll have a joke around and be good for the group," Creek told Phoenix Media this week.

"I know he's going to fit in straight away.

"He shoots the ball at a very high level and has deep range.

"He can play pick and roll and he's long defensively, so he’s going to be a great addition for us.”

Walker knows his side is in a fight for the finals and he's up for the battle.

"I definitely understand where we are at," Walker said.

"It's exciting. This is the best time of the year if you are a Phoenix fan as every game counts, every possession counts and winning each game makes you feel so much better.

"It's all fun, it's all love. I feel like I came here at the right time and hopefully we can end the season the right way. We will see what happens."

Walker spent Wednesday and Thursday studying video of the team and reading the playbook while also enjoying the sun after his previous stop was with French Pro A club Chorale Roanne Basket where he had limited opportunities.

Walker has a reputation as a skilled shooter with good length, who has no qualms defending guards or forwards.

The Phoenix will need his talent at both end if they want to take the game to the Wildcats.

"I'm coming out to play hard, communicate and bringing what I can bring," Walker said.

"I'm not coming to prove anything or show my talent or worth. I just want to play the right way and have no worries, no pressure. Just play the game."

The Phoenix play Perth Wildcats in Perth on Friday at 9.30pm, then face Sydney Kings in Sydney on Sunday at 5pm.