Jalen Suggs took the inbound pass and saw nothing but clear sailing. Three dribbles. Past the half-court line. A little stutter-step.

And straight into history.

The Gonzaga freshman banked in a shot at the buzzer from near the Final Four logo for a 93-90 overtime win over UCLA on Saturday night (Sunday AEST) that vaulted the Bulldogs to within one win of an undefeated season and the national title.

Talk about a perfect finish! 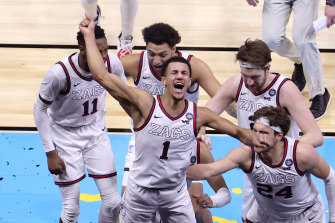 Jalen Suggs is surrounded by teammates as they celebrate his brilliant buzzer-beater.Credit:Getty Images

“I’m just telling you he makes those ones all the time in practice,” Few said. “He’s just got this magical aura about him. I knew when he shot it, it was going in.”

Before that, Suggs’ best play might have been his rejection of UCLA big man Cody Riley (14 points, 10 rebounds), who looked to be going in for a dunk that would have put the Bruins up by two at the two-minute mark. Suggs got the block, then fed Timme (25 points) for a dunk that instead gave the Zags the slight advantage with 1:55 left.

Even without Suggs’ shot, it would’ve been hard to beat this game for pure excitement – a welcome relief in a tournament that has produced mostly blowouts and duds, sort of like Baylor’s 78-59 snoozer over Houston earlier in the evening. 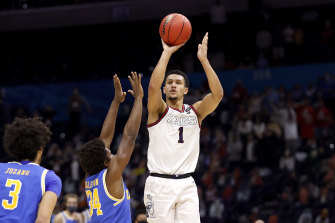 The nightcap featured 15 ties and 19 lead changes and an 11th-seeded UCLA team that simply wouldn’t give in. Even though they lost, the Bruins snapped a streak of 27 straight double-digit wins by Few’s juggernaut.

Some might say it was the greatest game ever.