Home » Basketball » The NBL’s slam dunk: League sees more growth on the back of NBA connections and TV changes

"It was only four years but it's felt like an eternity."

Australian basketballer Ben Madgen has a good perspective on the rise of the NBL, having headed to Europe just before Larry Kestelman took ownership of the league, and coming home this season to join expansion club South East Melbourne Phoenix.

When Kestelman took over the NBL in May 2015 it was in dire straits. The thought of the NBA's possible top draft pick playing in this league and drawing in millions of overseas eyeballs was as fanciful as the idea that an elite NBA coach would be leading the Australian Boomers in his off-season.

Both those things happened this past week as highlights of the Illawarra Hawks' teenage guard LaMelo Ball's triple-double passed 10 million combined views on social media, while Philadelphia 76ers boss Brett Brown signed on as Boomers coach for the Tokyo Olympics.

They add to a dream-like season for the NBL which has already seen Andrew Bogut's Sydney Kings draw a league record 17,514 fans to Qudos Bank Arena for their clash with Ball's Hawks, in a year in which Ben Simmons became Australia's first NBA All-Star and the Boomers beat Team USA in front of more than 50,000 people at Marvel Stadium.

The Kings and Melbourne United have become the league's biggest rivalry, especially after Sydney pinched championship-winning import Casper Ware from Melbourne this off-season, and they face off in Sydney on Sunday.

Bogut's return last season drew major bumps in crowds and earned media coverage, and his decision to play out the NBA season with the Golden State Warriors further boosted the NBL's standing in the US as he more than held his own after an MVP season with the Kings.

Domestic TV audiences are up but still modest since the league moved from Fox Sports to SBS Viceland and ESPN while every game is streamed for free on SBS OnDemand and global website Twitch. It’s hard to think of any major Australian sport with every game available for free.

The NBL's biggest weakness was always that it couldn't earn a lucrative broadcast deal while the AFL and NRL grew fat and rich.

But now it's a strength as they don't rely on TV money which is fast disappearing for other codes.

Ball and fellow NBA draft candidate RJ Hampton also earned the league its deal with Facebook Watch which broadcasts every Illawarra and New Zealand game into the US live.

Ball, Hampton and Sydney Kings guard Didi Louzada, whose NBA rights are already owned by New Orleans, will only be in the NBL for this year but their legacy could be that more high school stars follow them. NBL commissioner Jeremy Loeliger is already in talks with possible players for next season. 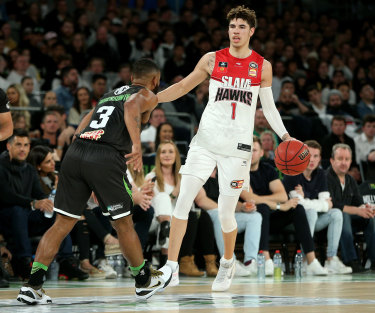 "LaMelo Ball has had the biggest impact on this league that any player has ever had," NBL commissioner Jeremy Loeliger told the Sunday Age and Sun-Herald.

"We never had a North American viewership until this season, we were available there and some people were tuning in but you couldn't talk about a consistent audience. We've had over 10 million views of the highlights of his triple-double.

"One of the aims was to make our product relevant in the international market. I do pinch myself about the numbers.”

Back in May 2015 as Kestelman told a media conference in Melbourne that he was going to make the NBL the biggest league in the country, the reality was his newly purchased competition was commercially on its knees.

The league had no sponsors except ball supplier Wilson, an expired TV deal and the relevance of the league to anyone beyond hardcore basketball followers was non-existent.

Perennial power Perth Wildcats were doing fine, and all 10 of the league's best attendances that season were at Perth Arena, while the Wildcats and New Zealand Breakers had shared all six titles since 2010.

Their battles were engrossing but physical, grinding affairs played in the worst possible time-zones for building a good TV audience.

Ask a person in the street about the NBL and their response would be somewhere between "Does Andrew Gaze still play?" and "It was better in the 1990s". 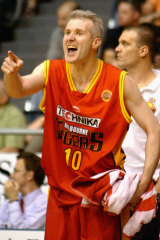 Loeliger has little trouble recalling what he saw as he looked over a league office with a handful of dedicated staff, at least two clubs out of eight with sketchy futures and no team in south-east Queensland.

"Everything from there has been upside," Loeliger said.

"If you put our great attendances to the side, the biggest [off-court] change since then is we now have a plethora of sponsors who are trusting in the business of the NBL and investing in it for the long term."

Arguably the NBL's biggest hurdle was winning back jaded fans, but finding a way to make tangible links with the NBA was equally important.

Kestelman and the league worked tirelessly to build links with the NBA, hosting an NBA Basketball Without Borders camp in 2016.

But Kestelman wanted more, specifically a chance to put his teams on court in the NBA and as soon as a team offered a pre-season game ahead of the 2016-2017 NBA season, he jumped at it.

It was costly to send teams over but the sight of Melbourne United taking Oklahoma City to overtime in Oklahoma City in October 2016 was worth it. NBL clubs have played 15 pre-season games since then.

Between those NBA games and the NBA scouts coming to see Ball and co, buzz about the league has grown and sending locals such as Mitch Creek and Isaac Humphries – plus imports such as Torrey Craig, James Ennis and Terrance Ferguson – to the NBA has further boosted its standing.

The NBL now claims it is the second-best national league outside of the NBA.

That line is a little cheeky as the Euro League, which draws the best European clubs together, is still clearly the best and giant clubs like Real Madrid and Barcelona are far beyond the NBL in talent and commercial power. The Spanish or French leagues are much closer to the NBL top to bottom but without a meaningful competition between the leagues it's all just talk. 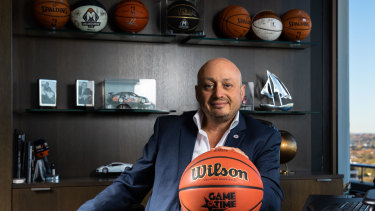 As a television product, the NBL is superior to Europe as they have boosted scoring, talent and pace of play. The referees were ordered to clean up holding and while the NBA plays 48-minute games and NBL 40 minutes, so far this season the NBL's overall scoring average is 111 compared to 110.5 in the NBA.

NBL games look much more like the NBA too and the addition of better game-nights are keeping fans coming back, with crowds rising 32 per cent since 2014-2015 and tipped to rise again this season.

"I remember playing against Perth with Damo [Martin] and Brad Robbins and to get the ball up the floor was very tough. Now it's a fast-paced game with a lot more foul shots."

Loeliger says the partnership with the Australian Basketball Players' Association has been underrated in the rise of the league.

The players have seen their pay and conditions improve, especially for lower and middle-tier players, while they haven't stopped the league adding a third import, the Next Stars program and the re-structuring of the salary cap to a "soft" cap.

"This has been a really important undertone to all that has happened," Loeliger said.

"Fans' passion and their 'stickiness' is closer with local talent than imports as they tend to stay for longer.

"Since 2015 we have developed a trend of being excellent at retaining imports who have had an impact like Jerome Randle, Casper Ware and Bryce Cotton and they've shown a willingness to be here long term.

"Retaining more Australian and NZ talent has allowed fans to have a stronger emotional connection with the league over a longer period of time."

When it comes to sponsors, under Kestelman and Loeliger the NBL chased big brands on short-term, low-cost deals which grew each year.

Naming rights sponsor Hungry Jacks offers free cheeseburgers the day after a player on a visiting team misses two straight free throws. It draws the biggest roar of the night and nets a tidy return for the restaurant when fans redeem their freebie and add a few extra items to their order.

Kestelman's controlling stake means he and his managers can make quick decisions on major issues while other sports battle in boardrooms.

The Phoenix are owned by US businessman Romie Chaudhari who has brought in retired NBA players Josh Childress and Zach Randolph to his ownership group, while Australian Paul Smith bought a 50 per cent stake in the Sydney Kings last year and took full ownership in April this year.

Smith built his fortune through his sports sponsorship business Repucom which evaluated sponsorships for top clubs throughout the NBA, NFL, European soccer and beyond. He sold it to Nielsen in 2016 for $US195 million, scored a healthy share of that price and then came home.

Smith's company Total Sports and Entertainment wanted to sink its teeth into Australian sport and the Kings fit the bill, especially because the Kings don't live and die on broadcast revenue.

"The equation of sport is going to change dramatically and irreversibly over the next five to 10 years," Smith told the Sunday Age.

"This shift is going to drive a change in behaviour by both brands, corporates, teams and leagues.

"We [TSE] wanted to put ourselves in the middle of that conversation, we felt we could be really effective if we had a genuine stake in the play.

"The reality is no one gets rich owning sports teams in Australia. It's pointless if you think that's the outcome."

The NBL still faces countless challenges, from the NBA changing its age limit to keep future LaMelo Balls, to economic challenges, Bogut's eventual retirement, and the drain of more elite Australians to the NBA.

Loeliger knows the league has much more growth to come.

"Commercially we are sustainable but we are still a long way from where we want to be."