Sydney have consolidated top spot on the NBL ladder with a 92-83 home win over in-form Cairns on Saturday.

The Kings led by seven at both quarter and halftime, and eight at the last break, having weathered a third-quarter fightback from the third-placed Taipans. 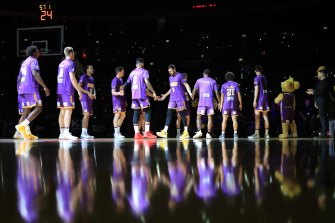 Don’t believe the hype: Sydney Kings were able to see off an in-form Cairns.Credit:Getty Images

Sydney relied on their long-range shooting prowess in the first quarter with all but five of their 23 points in the term coming from three-point shots.

Cairns got back to within three when Sydney turned the ball over seven times, before the home side clamped down on defence in the second period.

Sydney blew their buffer out to 12, but the Taipans rallied late in the quarter.

The Kings scored the first six points after halftime to kick their lead out to 13, but an 19-7 run in favour of the visitors got them back to within one.

In front of a crowd of 10,857 at Qudos Bank Arena, Sydney reasserted themselves either side of three-quarter time to take control and lead by 17.

Sydney had a whopping 34-12 advantage in bench points, led by Kickert.

They also enjoyed a 43-37 edge in rebounding and improved their ball handling in the second half, turning the ball over just three times after halftime.

It was only Cairns third loss in their last 11 games.