Home » Basketball » Simmons will ‘miss games’ with back injury

Ben Simmons remains under an injury cloud, with his return to NBA action court still unknown.

The Australian All-Star hurt his lower back last week in a Philadelphia 76ers practice session. 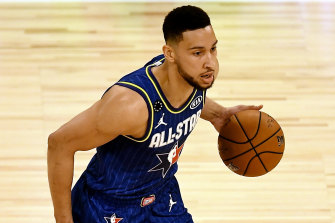 Ben Simmons will miss games through injury, according to an ESPN report.Credit:Getty Images

He sat out of a game against the Brooklyn Nets on Friday (AEDT), lasted just five minutes of Sunday's (AEDT) loss to the league-leading Milwaukee Bucks and will skip Tuesday's clash with the Atlanta Hawks.

ESPN, citing sources, reported Simmons is still undergoing treatment "and evaluation on his back and there's expected to be a course of action decided upon soon".

Simmons' injury comes as the 76ers make their final push toward the playoffs.

They sit in fifth position in the eastern conference.