The previously indomitable Sydney Kings are showing cracks after being pushed to the end in a 95-85 NBL win over the Brisbane Bullets.

Sydney looked unbeatable a week ago but their sixth-round loss to Melbourne United preceded a rousing performance from the Bullets at Brisbane's Nissan Arena on Friday night. 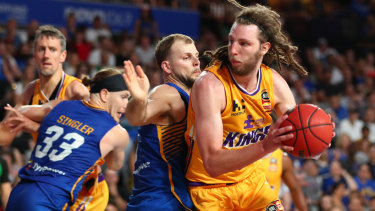 Craig Moller sparked the Kings’ fightback in the second half.Credit:Getty

The Kings dug themselves out with a 21-8 third quarter and a polished performance from Brad Newley, whose 20 points and cool head were exactly what was required in the face of the determined Bullets.

Forward Craig Moller's 13 points and six rebounds helped spark the Kings' comeback towards the end of the first half.

Brisbane's confidence took another hit after having a big scalp in their sights only to fall to their ninth straight loss to the Kings.

But they can at least take some solace from running the league leaders ragged for three quarters.

Small forward Lamar Patterson had a monster night, adding 22 points, 11 rebounds and seven assists for the Bullets, who now have four wins from eight games. 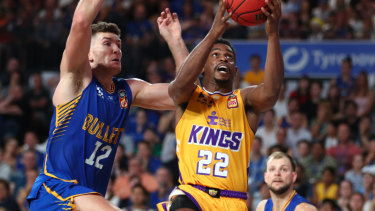 Patterson has a velvety grace that oozes, rather than blitzes, past defenders.

So it was in the first quarter when he began his run with a steal and an assist to open Brisbane's scoring.

Even more stirring was what the Bullets' defence inflicted on the Kings' attack.

Neither Andrew Bogut nor Casper Ware had any impact for Sydney in the first half as their dogged opponents used their bodies to ensure no easy baskets.

The Bullets hit the skids in the third quarter as the Kings chased down a 13-point half-time deficit to have command of the game at the final change.