With the Phoenix down six in the final minute of the game, Roberson found room to make two late three-pointers to force overtime before nailing another 15 points in the extra session to take the Phoenix to a stunning 112-105 win. 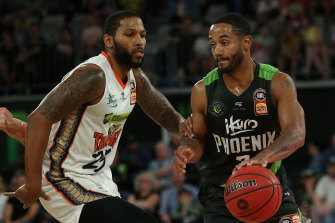 Red-hot import John Roberson came through in the clutch for Phoenix against the Taipans.Credit:AAP

Roberson had few chances to fire for much of the night but he rose when the moment demanded it, and his 32-point, eight three-pointer masterclass may well have prevented the NBL newcomers from fading out of the finals race.

A defeat would have seen Phoenix fall to six losses in their past seven games at a time where Adelaide and Cairns have surged into top-four contention.

Thanks to Roberson's heroics, the Phoenix remain in touch with the 36ers and Taipans and have a game in hand heading into the pivotal Christmas school holiday period.

"It was winning time and we had to get it going," Roberson told the crowd post game.

"This is a resilient group and we never give up."

Two clutch baskets from guard Scott Machado looked to have taken the Taipans to victory, Cairns up 95-89 with under a minute left.

But Mitch Creek snatched a steal and after two missed threes, Roberson nailed a three with 11.1 seconds remaining. After a time out, Phoenix's Dane Pineau tipped and retrieved the inbound pass from Cairns before the ball found its way to Roberson, who dribbled into space on the right side and nailed a game-tying three with 2.9 seconds to play.

Machado couldn’t make his three-point attempt on the buzzer as the game went into overtime, where Roberson's two threes in the opening plays killed off the contest.

Creek had 25 points and nine rebounds, while veteran Adam Gibson added 25 points of his own. Import guard DJ Newbill had 30 points for the Taipans.

The Taipans have been in hot form and they were shooting with confidence early as Kouat Noi and Cam Oliver found their range from outside, but the Phoenix held their nerve as some late points from Gibson and Creek saw them lead 30-28 at quarter-time.

Ben Madgen was crucial for the Phoenix midway through the second term as he went on a mini-tear, knocking down five quick points to push out the lead to six. The home side would carry that edge into half time up 51-46.

The Taipans lost Noi with what appeared to be a twisted knee late in the term, with Cairns missing his work inside (a team-high nine rebounds when he left the game) in the second half.

Taipans coach Mike Kelly swung some changes in the third term, with former Adelaide big man Majok Deng thrown in alongside Oliver. The pair controlled the paint and created room for Newbill, who hit 13 points for the term to see Cairns to a five-point lead at the final change.

Machado looked to have won it for the Taipans heading into the last minute before Roberson stepped up.

Meanwhile in the WNBL, top team Southside Flyers showed why they are title favourites with a 70-65 win over reigning champions Canberra Capitals in Canberra on Sunday.

The Capitals led early but the Flyers came home strongly in the last term to take the win, with Bec Cole scoring a game-high 19 points.