The Australian Opals can lock in a place in the final round of Tokyo Olympic qualifying with a win over India on Saturday night.

Australia opened its FIBA pre-Olympic qualifying tournament in Malaysia with an 84-51 win over Chinese Taipei on Thursday night. They face India on Saturday and Japan on Sunday.

They aim to win both and earn the highest possible seeding for the final round which will see teams drawn into one of four qualifying tournaments in February.

With her side far superior to their undersized opponents, Opals coach Sandy Brondello shared the minutes around with Liz Cambage top-scoring with 16 points in 16 minutes, Bec Allen scoring 13 points and Cayla George 12 points.

Centre Marianna Tolo was also strong with eight points in 18 minutes in her first senior international in two years after injuries continually kept her sidelined.

The Opals are expected to make equally light work of India on Saturday then turn their focus onto a big performance against Japan who have beaten them in recent years, including in the gold medal game of the FIBA Asia Cup in 2017.

But with WNBA stars like Cambage, Allen and Leilani Mitchell, plus veterans Jenna O'Hea and Tolo, the Opals will be well-placed to get that win and avoid any disappointment heading into the qualifying tournaments. 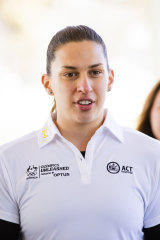 Japan already have a place in the Olympics, as do reigning champions USA, but both nations are playing through the qualifying stages as a way to remain at their best heading into the Olympics.

FIBA will host four, four-team tournament in different locations in February with the top three in each event qualifying for the 12-team Olympic Games tournament.

In the other Asian pre-qualifiers hosted in New Zealand, the Tall Ferns thumped Philippines 111-54 on Thursday but must beat either China on Saturday or Korea on Sunday to have any chance of making the top-two and progressing to the next round.

Korea beat China 81-80 on Thursday night which opens up the chance those two nations plus New Zealand end on a 1-1 record thus will go to tie-breakers.

All games will are live streamed in FIBA’s official You Tube channel with the Opals playing India at 8pm AEDT on Saturday.

The WNBA has paused for the pre-qualifiers and resumes on November 22.