Melbourne United star Shawn Long has heard people questioning his teammates and their will to win, now he plans to respond.

Long and fellow import Melo Trimble both play their 50th NBL games on Sunday when United take on New Zealand Breakers in Auckland and their milestones arrive at the make or break point of the season. 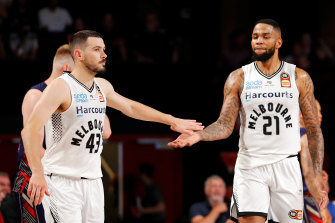 Melbourne United’s Shawn Long (right) and Chris Goulding during the clash with the Adelaide 36ers earlier this month.Credit:Getty Images

United (11-10) have seven games left in their season and need as many wins as possible to assure themselves of a finals place and with the Breakers (10-12) beating top team Sydney Kings in New Plymouth on Friday night, suddenly they are shaping as one of the most likely sides to take Melbourne's top-four position from them.

That brings some pressure while Trimble has fallen into a form slump the past four games and the team has struggled at the same time.

Long is good friends with his fellow American and he takes offence at how some supporters and commentators have questioned Trimble's commitment and the commitment of the whole United roster to winning.

"I'm hearing a lot of talk around about winning and stuff like that," Long said.

"I'm kind of fed up with people questioning whether certain guys want to win and stuff like that. That's definitely something [a chip] I've got on my shoulder this weekend." 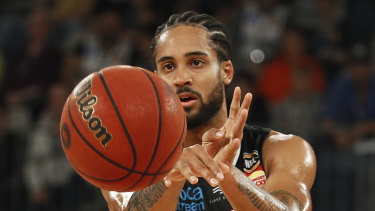 Trimble still sits in the top 10 of the NBL in scoring (19 points per game) and assists (4.95 assists per game) and United still back him to lift again and have been juggling their line-ups at training this week to give themselves some different looks.

The Breakers were without import guard Sek Henry (calf) and teenage guard RJ Hampton (hip) on Friday night but could still suit either up on Sunday.

Breakers import Scotty Hopson has continued to star and had 30 points, six rebounds and five assists in the win over Sydney, and slowing him down will be essential to winning on Sunday.

"I tell him just stay positive, he will get out of it," Long said.

"I know he's a great player, he'll get out of it, keep giving him that encouragement."

Melbourne coach Dean Vickerman has defined the last seven games of his side's season as a best of seven series like in the NBA play-offs.

"This is our best of seven series, we have to win this series and NZ is the first game," Vickerman said.

"We can't second-guess ourselves, it's all about our confidence in this last seven games."

Vickerman has also put the heat on his players to support Chris Goulding, Trimble and Long when they are double-teamed by making their open shots.

"Everybody is alert of the sit we are in," Long said.

"We haven't lived up to the potential of the team but right now is the time to turn it on.''

"The vibe is that we know what we have to do and I think we'll do it this weekend."

Long was also excited about reaching 50 games after moving between different leagues and countries in recent years.

"That's cool probably been the first time I've played 50 games in one league in a while," Long said.

"I think I've kind of made a name for myself here and the next step is winning big here and that's something I'm really trying to do."