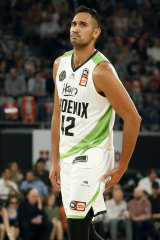 Tai Wesley feels the pinch in round one.Credit:Getty Images

Few things get to Tai Wesley. But he admits he found his hamstring injury hard to handle.

Five minutes into the South East Melbourne Phoenix's season-opener with Melbourne United, Wesley had eight points from perfect shooting when he felt the muscle go.

Wesley, cheering his new teammates to what became their first NBL win, thought he would be back quickly. So he was shocked when test results showed he would be out for eight to 10 weeks.

Nine weeks on, Wesley just needs to pass a fitness test this week to be cleared to take on the Perth Wildcats at Melbourne Park on Sunday afternoon.

"The real blow was the phone call with the results from the MRI. That's when it really hurt," Wesley said Tuesday.

"Injuries are not something I'm used to. In five years I've missed a month due to an appendix, that's it. Then they tell you're out for at least eight weeks and your focus shifts and you need to look somewhere else to get that high you get playing basketball."

Wesley looked to his wife Chyna and two young children, his rehabilitation goals and his teammates to inspire his recovery.

The 33-year-old has been an active participant at training, offering guidance to those on court and young guns like Terry Armstrong on the bench. At home he says his family were pivotal to maintaining his focus while he also kept to a diet to avoid adding too many kilograms to his 200-centimetre, 110-kilogram frame.

"I have the best support system anyone could ask for in my wife and children. The easiest part was having them to lean on," Wesley said.

"My son was gutted when I told him I couldn't jump on the trampoline with him, my daughter doesn't know what's going on yet, but my son was like, 'Dad, are you OK?', so he's been happy the past couple of weeks when I've been able to jump back on the trampoline."

Last week the Phoenix had weight and skinfold tests following up from round one. Wesley was happy to see his numbers had dropped despite sitting out.

He's been training fully the past week or so and is rebuilding connections with his teammates.

"I've been really diligent with my recovery," Wesley said.

"My tendency would be to explode and get huge when not training every day so it's something I've fought hard with."

When he went down, Wesley was one of the foundation pieces of the first-year Phoenix side. He was the pressure valve on offence whom they could throw the ball when things weren't going well.

It's a mark of how resilient the new club have been that they have posted a 6-5 record and sit in third place with Mitch Creek, John Roberson and veterans like Ben Madgen and Adam Gibson stepping up.

Wesley knows his side needs more wins so doesn't want to upset their rhythm, so he plans to fit in where he can.

"This team has some fight, that's been our identity, a team that never says die," Wesley said.

"Hopefully I can add to that."

If Wesley does suit up, replacement import Jaye Crockett will come off the roster after an excellent stint with the team.

The Phoenix host Perth Wildcats at Melbourne Arena on Sunday at 3pm AEDT.