Jae’Sean Tate has come to Sydney to be recognised in America.

The Kings recruit, a standout during his side’s 3-0 start to the NBL season, had a chance to make his mark with the Milwaukee Bucks in the 2018 NBA Summer League but was hit by injury. He knows his exploits in Sydney could be a springboard back to his NBA dream.

Tate produced 14 points and six rebounds against New Zealand on Friday night in front of a home crowd that included a handful of NBA scouts. 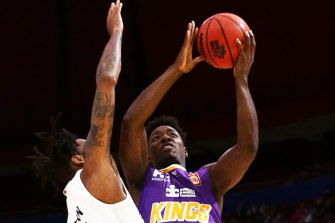 “Now the NBA has got a whole scouting agency over here in Australia,” Tate said. “With the young stars coming, and how much the league has grown in the past couple of years, I think this is a great stepping stone for the guys trying to get their name out there.

“They [NBA scouts] are always watching here and that’s why I wanted to be a part of this league. People in the States know about the NBL.”

Tate will be a focal point as the Kings again take on the Breakers on Sunday, this time on the other side of the Tasman. It continues a journey that also took him to Belgium, where he played for the Antwerp Giants.

“Two years ago I was with the Bucks, I didn’t get to play,” he said. “I had some great minutes with the [Denver] Nuggets [in the Summer League] and some great feedback. Of course that’s my goal, that’s everybody’s goal who plays this sport: to play in the NBA.

“Sometimes you’ve got to keep chipping away. I found a home here with the Kings and I’m loving it. The environment, the fans, just being able to play with veteran players that have had success in their career and a coaching staff that has had success, it’s been great.”

Andrew Bogut was the difference against the Breakers in their first clash, claiming 11 points, 15 rebounds, five assists and five blocks.

It’s a performance coach Will Weaver hopes he can replicate on Sunday.

“Andrew was bad ass. Unreal,” Weaver said. “He protected the rim, he blocked a hell of a lot of shots and affected a lot more.

“They didn’t get a ton of rim attempts, but when they did ‘Bogues’ [Bogut] is back there patrolling and doing Bogues stuff. I think all of us are just excited and grateful that he continues to turn out great performances.”