Sydney have suffered back-to-back defeats for the first time this NBL season, with an electric fourth-quarter comeback falling short against Cairns.

Two days after being hammered in Perth, the league leaders have fallen 109-98 to a reborn Taipans outfit who have leaped into the top four. 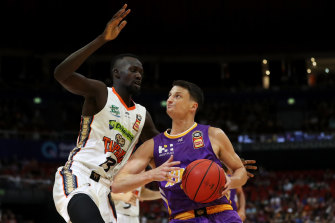 Shaun Bruce looks for a route to the basket during the Kings’ 11-point NBL loss to Cairns on Sunday.Credit:Getty

Cairns had kept the Kings in check for most of Sunday evening, and had a 17-point lead following a Majok Deng three early in the fourth quarter.

Sydney star Casper Ware, however, ignited the Qudos Bank Area crowd with a sizzling 21 points in the period to cut the deficit to five with two minutes to go.

But a clutch triple from Machado, as well as some composed free-throw shooting, gave the Taipans their fifth win in six games. 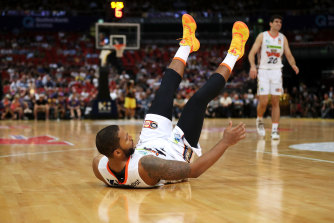 Ware finished with 23 points and seven assists, with his 21 in the fourth quarter breaking the record for the highest individual score in a quarter in league history.

Only 48 hours after their big loss to the Wildcats, the Kings' struggles on the defensive end continued when they conceded 30 points in the opening quarter at home.

Sydney had their issues on the offensive end as well, with Ware and returning veteran Kevin Lisch being held scoreless for the half.

Ware finally grabbed his first points early in the third quarter, but their biggest problem was stopping a Taipans offence which was firing on all cylinders.

Newbill, in particular, had the Kings' defence in fits, scoring 13 points in the term to give Cairns an 11-point lead at the final break.

Their cushion ballooned to 17 when the visitors opened the fourth with consecutive treys, before Ware exploded.

Held to just two points over the opening 36 minutes, the American point guard scored nine straight points to spark the crowd of 8638 into life.

However, the Taipans held on to claim their maiden victory at Sydney Olympic Park in 11 attempts, as well as their first this season against a top-three team.