While most of the NBA's top free agents were signing big new deals, finals MVP Kawhi Leonard and the LA Clippers were almost silent.

NBA free agency is all about hype and bombshell moves but Leonard's camp demanded the team's chasing him stay quiet and leave their man to make his decision between chasing another title with the Toronto Raptors or moving to Los Angeles either as a Clipper or Laker. 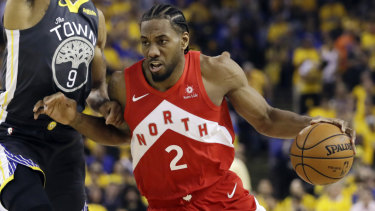 Days went by, countless commentators filed erroneous speculative takes on Leonard's intentions but late on Saturday [Australian time] Leonard not only agreed to a four-year US$141 million deal but brought another NBA superstar with him in MVP candidate Paul George who arrived via a trade with Oklahoma City Thunder.

The Clippers, owned by Microsoft billionaire Steve Ballmer, gave up potentially five first round picks and two future pick swaps plus a future star in Shai Gilgeous-Alexander and forward Danilo Gallinari to the Thunder.

Leonard's move wasn't a shock, George’s definitely was and combined with a supporting cast led by Patrick Beverley, Montrell Hazell, Landry Shamet and Mo Harkless suddenly the Clippers are a front-runner for the NBA title and likely to have the best defence in the NBA.

Reports suggested Kawhi contacted George, who comes from LA, and convinced him to request a trade and join him at the Clippers. Amazingly nothing leaked about the move. 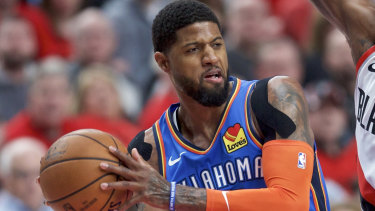 Riding shotgun: Paul George has linked up with Leonard at the Clippers.Credit:AP

With Kevin Durant (achilles) and Klay Thompson (knee reconstruction) likely to miss the full season, the title race was already going to be wide open and the Clippers join the title race while the Raptors and Thunder likely drop out, possibly into rebuilding mode.

Houston, Milwaukee, Portland, San Antonio and Denver have kept their cores and added role players so they will still be good while Boston and Golden State have lost stars so are poised to drop back although could still find winning formulas.

More moves could happen but here is a snapshot of four contenders who have made big changes:

Title winning coach Doc Rivers remains in charge and he will have Kawhi Leonard and Paul George as his superstars. It promises to be a season different to all others in franchise history but they have little room for error or injury as they have mortgaged almost all their first round draft picks and most of their salary cap. Teaming them with Beverley, Hazell, Shamut, Harkless and centre Ivica Zuvac perhaps adding another veteran or two will top them off nicely. Rookie big man Mfiondu Kabengale could turn heads too. Their rivalry with the Lakers will now rank among the biggest in the NBA.

LeBron James will be in his second year and the team has transformed after trading Lonzo Ball and several young stars for superstar forward Anthony Davis. Just as importantly Raptors guard Danny Green will join them while Rajon Rondo, JaVale McGee, DeMarcus Cousins and Quinn Cook are on board too. New coach Frank Vogel will have a big job ahead but the Lakers will be right in the running.

Before Kawhi’s bombshell the Jazz were looking one of the big winners during free agency and they should still be front-runners with point guard Mike Conley arriving from Memphis. Conley is an elite playmaker and defender who should fit perfectly alongside Donovan Mitchell, Joe Ingles and Rudy Gobert. Add Bojan Bogdanovic, Ed Davis and Jeff Green and the Jazz will win games.

Losing Jimmy Butler and JJ Redick hurts but keeping Tobias Harris, adding Al Horford, Josh Richardson and, likely, elevating Ben Simmons to long-term extension along with Joel Embiid means the Sixers will be high up in the Eastern conference. Rookie Matisse Thybulle and last year's first-round pick Zhaire Smith add athleticism and freshness to their wings. If Simmons and Embiid go to yet another level, the Sixers could win it all.