In  July 2012, Chris Goulding was discussing with his future wife Molly the prospect of life without the NBL.

It seems unthinkable today that the Australian Olympian, NBL grand final MVP and the only player to have a 50-point game in the 40-minute era could have been lost to his career but when the Gold Coast Blaze suddenly dropped out of the league, Goulding was left without a team.

Most NBL rosters were full and with veteran teammates such as Adam Gibson and Anthony Petrie also on the market, Goulding, then 23, feared the worst.

Then his phone buzzed and his career, and his life, changed forever.

"I was kind of calling round, asking teams for a job," Goulding told The Age this week. 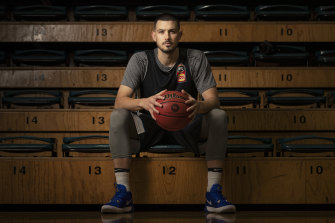 Chris Goulding will play his 300th NBL game on Saturday.Credit:Getty

"I remember Wollongong and Adelaide had their 10th-man spot and weren't willing to give it to me.

"My now wife and I were laying in bed saying 'this doesn't look good' and I got a message from Anstey out of the blue."

Chris Anstey, Australian great and then Melbourne Tigers coach, had released import Ron Dorsey to free up a spot for Goulding.

"Hey, we are making some moves with the roster and we'd love you to sign with us – that was it essentially," Goulding said.

"I would have done anything to stay in the league at that time. So, of course, thanks, bang, I signed with Melbourne, we moved down and Chris, DMac [assistant coach Darryl McDonald] and those guys gave me a lot of responsibility from the jump.

"They gave me my first starting job – my confidence just grew from there."

Anstey, then only recently retired, had trained with the Blaze while visiting good mate Mark Worthington the previous season.

"He was young, untapped and I thought he could be more than just a shooter,'' Anstey said this week. ''Sometimes young players just catch your eye and he fascinated me.

"When I called he picked up the phone straight away."

Goulding went to work in Melbourne, sometimes doing extra training at 10pm or 11pm and soaking up NBA skill drills. He was encouraged to take the contested shots he's now known for as he made them so often in training.

Goulding doubled his minutes and his points that first season despite the Tigers having a turbulent campaign. The next season he led the league in scoring with 23 points a game, had his 50-point outburst in a final-round win over Sydney Kings and led the Tigers to the semi-finals, where they lost in game three to Adelaide.

Outside of a season in Spain with Basket Zaragoza and some NBA Summer League appearances, Goulding has been a fixture in Melbourne, re-joining the club for their second season as Melbourne United and becoming the face of the franchise, an Olympian, a two-time FIBA World Cup player and an entertainer.

The 31-year-old will play his 300th NBL game when Melbourne take on Adelaide 36ers at Melbourne Arena on Saturday.

Goulding earned his start in the NBL as a development player with the Brisbane Bullets under Joey Wright, now coaching Adelaide. He grew with the Tigers before becoming a more complete package at United whom he captained to the NBL title in 2017-2018, also winning grand final MVP, and he still leads the club.

Goulding is a natural shooter but it's his development as a passer, defender and leader that has taken his game to the next level. He attributes his dedication to his dad Steve who played two AFL games with North Melbourne and had a celebrated career with Claremont in Western Australia and North Launceston in Tasmania.

"I put that down to the work ethic that was instilled in me by my father and Joey as well," Goulding said.

"Often when you are a kid you think you are working hard and it takes a reality check to let you know what real hard work is. Joey pushed me to do extras before and after training, then every day in the off-season. Those individual sessions where you locked in on your skill development were great."

Melbourne coach Dean Vickerman has praised Goulding's leadership in the side's rise from big spenders to championship winners and he rates him with the NBL greats as a shooter.

"Having coached some elite shooters like CJ Bruton and Kirk Penney, having been around Andrew Gaze, Chris Goulding has to be talked about in that conversation as one of the elite shooters Australia has produced," Vickerman said.

But for all he has achieved, Goulding is perhaps the NBL's most polarising player.

Melbourne United fans love him for his big shots and showmanship, same for almost anyone who has played or worked with him at NBL or Boomers level.

But fans and some opposing players rage at what they see as his arrogance on court and his ability to, at times, draw charges or offensive fouls by "flopping".

Centre Alex Pledger played against Goulding for almost a decade as part of the New Zealand Breakers before crossing to Melbourne last season and his view of Goulding flipped completely.

"I generally advise against it, but, if you are a comment reader [on social media] then after games people have opinions about him taking bad shots, being a flopper or anything like that," Pledger said.

"He's the guy that people love to hate but being on his team, you see he's the exact opposite of that. His personality away from the court is different than you'd think based on how he is on-court."

Goulding is in his prime and focused on taking Melbourne United to another title.

There is the possibility of a second Olympics next year and maybe a first medal for the Boomers.

Goulding also remains on the edge of the NBA and forced Team USA to closely guard him during the Marvel Stadium series this year after scoring 19 points in the first game.

Age and experience has taught Goulding to focus on the team and less on himself.

"There is a lot more to it than just having great players and rolling them out there," Goulding said.

"I wish I knew that when I was young, but back then I was just in survival mode, trying to play as good as I can to get another job.

"Now I spend a lot of the lead-up to games thinking about how we can, as a group, execute this way or that and how we can find a way to win as opposed to when I was younger and it was like 'oh my God, I need to play well'.

"300 games is something I never thought I would tick over and I think I've got a lot of good years left."