Gordon Hayward has scored 39 points, tied with his career high, making all 16 of his two-point attempts in Boston's 119-113 win over Cleveland, the Celtics' fifth in a row.

Hayward put in Kemba Walker's miss with 22 seconds left to give the Celtics a 118-113 lead before Walker stole the inbound pass and hit a free throw to put the game away. 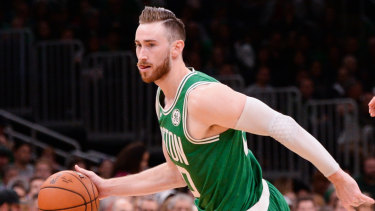 Hayward made 17 of 20 shots, including a three-pointer. He scored 16 points in the opening quarter and 22 in the first half, hitting all nine attempts from the field.

Walker had 25 points for Boston, who haven't lost since the season opener against Ben Simmons' Philadelphia.

Matthew Dellavedova returned for the Cavaliers after missing two games for personal reasons. The Australian scored four points to go with two rebounds and two assists in 12 minutes of court time.

Elsewhere on Wednesday (AEDT), LeBron James had 30 points, 11 assists and 10 rebounds for his third consecutive triple-double as Los Angeles rallied to beat Chicago 118-112.

The Lakers trailed by 19 before shutting down the Bulls in the fourth quarter.

Kyle Kuzma, Quinn Cook and Dwight Howard sparked the comeback, Kuzma scoring 11 of his 15 points in the fourth.

Atlanta overcame the loss of John Collins to beat San Antonio 108 to 100, with the star forward suspended for 25 games after testing positive for Growth Hormone Releasing Peptide-2.

Point guard Trae Young starred in his return from an ankle injury, scoring 29 points and providing 13 assists for the Hawks.

Patty Mills scored 16 points for San Antonio, shooting at 83 per cent from the field, with three from four three-pointers.

Devonte Graham scored a career-high 35 points, Bismack Biyombo dominated off the bench and Charlotte battled back from a 14-point, fourth-quarter deficit to beat Indiana 122-120 in overtime.

Shai Gilgeous-Alexander scored 17 of his 24 points in the second half to lift Oklahoma over Orlando 102-94.

Chris Paul added 20 points and six assists for the Thunder, who held their opponent under 100 points for the fourth time in seven games.