Southside Flyers remain on top of the WNBL ladder but that will mean little if they can't get the better of reigning champions Canberra Capitals when the two sides face for the second time on Sunday.

The Flyers have an 11-1 record after comfortably handling Townsville Fire 81-62 at Dandenong Stadium on Friday night.

However, their only loss this season came against the Capitals who, along with Melbourne Boomers, appear the closest rivals to the Flyers for the league title. 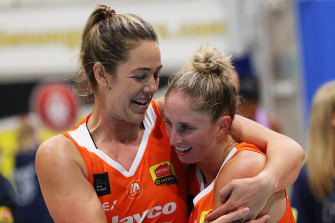 Opals stars Jenna O'Hea and Leilani Mitchell have spearheaded the Flyers. Mitchell was also pivotal in the Capitals' championship win last season before being lured back to Melbourne where she started her career.

But Capitals stars Kelsey Griffin and Kia Nurse continue to dominate for the home side.

The Flyers were able to rest the likes of O'Hea and Mitchell for the whole last term on Friday night so they could both be fresh for the expected long minutes of Sunday’s game at the National Convention Centre where the win will be essential to stopping Canberra owning the tie-breaker over them.

Meanwhile, the Boomers will also face a big test on Sunday as they fly to Perth to take on the Perth Lynx, who are one of the sides attempting to make a push for the top four in the second half to the season.

The Boomers are in third place with an 8-3 record while the Lynx have fallen to 3-8 after injuries to imports Ariel Atkins and Imani McGee-Stafford hurt them in the opening rounds.

Boomers coach Guy Molloy sees it as a danger game, especially as the Lynx almost beat them in Melbourne last round.

"I know they've had a lot of overtime defeats and then the injury to McGee-Stafford and bringing Atkins in late; they've had some significant hurdles," Molloy told the club website.

"If you're a fan looking at it and you wonder why they haven't clicked and won those games, the reality of it is when you experience the injury troubles they've had with their imports, and then those early overtime defeats, it rocks your confidence.

"They're a really good team and they'll find their way and I think it's a really dangerous game for us."