Australian tennis player Nick Kyrgios has offered an insight into the future of basketballer Giannis Antetokounmpo, dropping a clue following his recent FaceTime call with the NBA's two-time most valuable player.

In an interview with The Sydney Morning Herald, Kyrgios may have let slip Antetokounmpo's next move as he contemplates his future at the Milwaukee Bucks beyond the 2021-22 season. 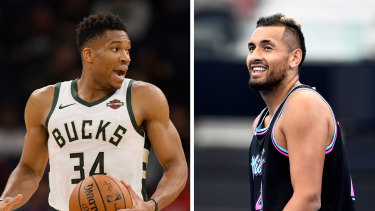 Giannis Antetokounmpo and Nick Kyrgios have developed a bromance on social media.Credit:Getty

"I was like 'oh yeah, that’s pretty cool'. Then it was Giannis. I was kind of lost for words. He’s just one of the boys, really. I’ve never met him before but I feel like I get along with him pretty well."

Antetokounmpo has been quite vocal on social media about Kyrgios recently, which began with a post last month about his favourite tennis players.

"So Nick you were my favourite tennis athlete, player, whatever it's called," Antetokounmpo said. "But now it's Nadal because I just love him. I love him. Sorry."

When pressed on his demotion, Kyrgios resisted the chance to return serve with a tongue-in-cheek slap down of the man who recently referred to Kyrgios as "nuts" after watching highlights of his meltdowns on YouTube. 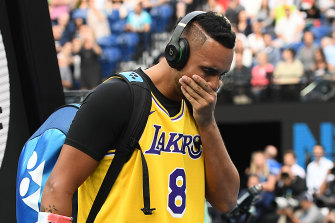 An emotional Nick Kyrgios walks out on to Rod Laver Arena during this year’s Australian Open.Credit:Getty Images

"That was pretty brutal that day," Kyrgios said. "I remember waking up and you don’t really know what to believe these days, whether it’s a hoax or not. Then you see it on the major news outlets that it’s actually true … that was tough. I didn’t really watch basketball that day … Then I had to go and play.

"I actually wanted to play in the Kobe jersey. I thought that would have been pretty monumental playing one of the best in the Australian Open, it would have been awesome. Just walking out there, the energy, and that actually made it on to his tribute video as well, so that’s something that is going to last forever. Hopefully athletes can continue to bring what he aspired to be. It was a sad day."

Soccer
Is this the perfect season for Jose Mourinho to win the Premier League title with Tottenham?
WWE News