A rising Australian basketball star and a recent NBL import will be in the NBA this coming season.

Queensland guard William McDowell-White and former Cairns Taipans import Devon Hall have been elevated to two-way contracts with the Houston Rockets and Oklahoma City Thunder respectively, according to US media reports. 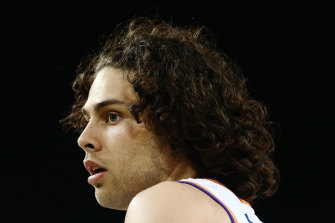 William McDowell-White has signed a two-way deal with the Houston Rockets.Credit:Getty Images

McDowell-White, the 21-year-old son of former AFL star Darryl White, had already signed a pre-season contract with the Rockets, but ESPN reported overnight he would be moved to a two-way deal which will see him move between the NBA roster and G-League side Rio Grande Valley Vipers.

It's unlikely the Rockets will have a full roster spot for McDowell-White given their backcourt includes recent NBA MVPs Russell Westbrook and James Harden along with star shooting guard Eric Gordon, but having a full season to develop his game will only help the athletic playmaker.

The Rockets have yet to formally announce McDowell-White's elevation, but they will be in no rush as it's an internal roster move.

The Thunder held Hall's NBA rights from the 2018 NBA Draft, and they encouraged him to join the Taipans last NBL season to mature and develop his game.

While the former University of Virginia star had an inconsistent season, he did make some strides and he has impressed the club enough to take one of their two two-way deals.

The final tally of Australians in the NBA this coming season remains unclear but as it stands, nine Australians have full contracts along with McDowell-White's two-way deal.

Centre Isaac Humphries has an Exhibit 10 non-guaranteed pre-season deal with the Orlando Magic and Deng Adel has the same deal with Brooklyn Nets.

Mitch Creek, who spent time with Brooklyn and Minnesota last season, will take up his contract with NBL expansion club South East Melbourne Phoenix, but hasn't given up on his NBA dreams beyond this season

Fellow Boomers forward Jock Landale received interest from several NBA clubs including the Milwaukee Bucks, but will play through his deal with Lithuanian club Zalgiris Kaunas this season before a likely move to the NBA next season.

Andrew Bogut will return to the NBL's Sydney Kings after joining the Golden State Warriors for last season's playoff-run. He hasn't ruled out an NBA return once the NBL season finishes, but only if the team and situation are appealing.