Kevin Durant's four-year, $164 million ($A 235 million) contract with the Brooklyn Nets includes a player option for the final year, according to multiple reports.

ESPN reported that the Nets' other big free agent acquisition, point guard Kyrie Irving, also has a final-year player option on his four-year deal worth $142 million ($A 204 million). 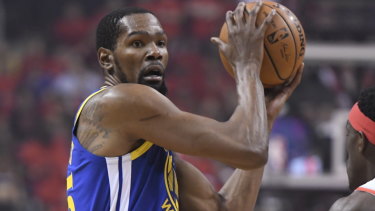 Durant has the option to opt out of his deal after the 2021-22 season, which could give the Nets just two healthy seasons from the 10-time All-Star.

He is expected to miss the 2019-20 season with a ruptured Achilles tendon he suffered in game five of the NBA Finals against the Toronto Raptors.

Other potential free agents in 2022 include LeBron James, Stephen Curry and James Harden.

Most of the big names in NBA free agency agreed to new deals within hours of the deadline passing last week.

In his annual summer league news conference in Las Vegas on Tuesday, commissioner Adam Silver said that didn't sit well with him.

"My sense in the room today was, especially when it comes to free agency and the rules around it, that we've got work to do," said Silver, who was speaking after the annual board of governors meetings wrapped up.

"It's still the same principles of fair balance of power and a sense that it's a level playing field. I think that's what teams want to know.

"I think they're put in difficult situations because when they're sitting across from a player and whether it's conversations that are happening earlier than they should or frankly things are being discussed that don't fall squarely within the collective bargaining agreement, it puts teams in a very difficult position because they are reading or hearing that other teams are doing other things to compete, and at the end of the day, that's what this league is about: competing for championships."

Aside from Kawhi Leonard, all of the most discussed names – the likes of Durant, Irving and Kemba Walker – agreed to deals soon after free agency opened, leading some to suggest that teams had ignored rules in place to level the playing field.

"My job is to enforce a fair set of rules for all our teams and a set of rules that are clear and make sense for everyone," said Silver. "I think right now we're not quite there."

"It falls in the same category of issues of the so-called rule of law within a sports league. You have a contract and it needs to be meaningful on both sides," he said.

Soccer
Can Leeds end their 50-year curse when the Championship resumes?
WWE News