The crowd screamed for Ben Simmons to shoot as he dribbled near the perimeter in a preseason game against a team from China.

Joel Embiid motioned for him to let it fly.

The Australian took a couple more steps, stopped and popped.

Fans celebrated Simmons' first career three-pointer as if the Philadelphia 76ers had just won Game 7 of the NBA Finals. Embiid ran over and hugged him, teammates rushed the court and the internet went wild.

It's been nearly impossible to mention Simmons without adding jump shot in the conversation since his debut in October 2017.

The 23-year-old Simmons is considered one of the best players in the world despite his reluctance to shoot jumpers in his first two seasons. 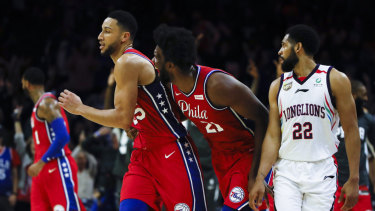 Joel Embiid celebrates with Ben Simmons after he hit the holy grail – at least for the shooting-shy Aussie: a three-pointer against Guangzhou Loong-Lions.Credit:AP

The All-Star point guard said that he allowed criticism to bother him, but he "fell in love with the game again" over the summer during the countless hours he spent in the gym working on his shot.

Simmons realises adding a jumper would make him a complete player.

"I think I was just too worried about what people were saying, what was going on around, too many outside noises, and I was able to block them out this summer and not really focus on what people say. I don't really care anymore unless it's coming from someone in my circle or someone who is trying to help me get better."

The Australian is 0-18 from three-point range in his career, including playoffs, so making one even in a preseason game was a big deal for everyone – except him and his coach.

"I think the whole thing is so overblown," Brett Brown said.

"I think in general, it's so inflated the attention."

Simmons sat out his first season with a broken right foot after the process-trusting Sixers selected him No.1 overall in the 2016 draft.

He earned Rookie of the Year honours the following year and became an All-Star for the first time last season. He has helped lead the Sixers to the second round of the NBA playoffs twice, and has averaged 16.4 points, 8.5 rebounds and 7.9 assists.

Questions about his ability to shoot sometimes overshadow everything he does well.

"I'm confident in saying I'm not a great shooter," he said.

"I'm getting better, though. It's a game. There are five people on the court. I lack something that I'm not great at it but there's other areas I'm very great at. I run the floor as well as anybody. I'm physical. I can rebound the ball.

"At 6'10", I'm a point guard, I can guard one through five, but [shooting is] just one thing that's coming into my game which I'm excited about. I love getting better. I love spending time in the gym and building that confidence."

Simmons worked with trainer Chris Johnson in Los Angeles during the summer, and videos showing him shooting teased fans for months.

"I believe if you continue to work, good things will happen over time, and that's what I will continue to do to keep playing the game I love at a high level," he said.