He follows in the footsteps of former NBA players Zach Randolph, Josh Childress and Al Harrington, who jointly have a share in the team. 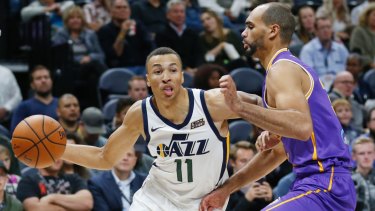 Dante Exum in action for the Jazz.Credit:AP

The Phoenix are the NBL's latest expansion side and will begin playing in the NBL this coming season.

"It is a privilege to have Dante join the Phoenix family," Phoenix owner Romie Chaudhari said.

"I have spent time with Dante, and he is really wonderful to work with. I am proud to have him as part of our organisation and he represents our club's value set.

"Since he's from Melbourne, our community focus was critical for Dante choosing to come on board. I look forward to watching Dante's career blossom both as an NBA player and as a successful entrepreneur."

Exum, who plays with the Utah Jazz, said in a statement he was excited about what the Phoenix would bring on the NBL.

"It's an honour to be joining the investment group of the South East Melbourne Phoenix," Exum said.

"Melbourne has played a key role in my basketball journey and the chance to be involved in the ownership group of the SEM Phoenix is a perfect way to further that strong connection with the city.

"I look forward to seeing the continued growth of the NBL and much success and excitement for the team and the city of Melbourne."

The NBL season begins on October 3 with the Phoenix playing Melbourne United at Melbourne Arena.