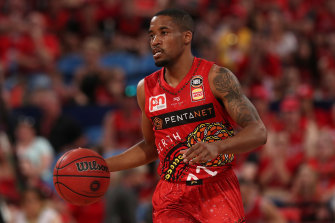 Cotton is in his fourth NBL season, and previously won the MVP award in 2017-18. He was awarded the honour in Melbourne on Sunday night.

The Perth guard led the NBL in scoring with 22.48 points per game, and also led the league in steals with 1.74 per game.

Cairns coach Mike Kelly was awarded the Lindsay Gaze coach of the year after taking the Taipans from bottom of the ladder last year to making the finals, where they will face Cotton's Perth side.

Brisbane emerging star and potential NBA signing Will Magnay was named most improved player in a very deep field after rising from the end of the Brisbane bench to becoming one of the league's best big men.

The Taipans also had import Newbill score the defensive player of the year award, beating Magnay 46 votes to 42, with Bogut in third on 33 votes.

Brisbane guard Jason Cadee won the sixth man of the year award for best bench player with 31 votes, ahead of Sydney big man Daniel Kickert with 28 and Magnay in third on 26 votes.

Machado was named fans' MVP, and Vaughan Mayberry was named referee of the year.

The NBL semi-finals begin on February 28 after the FIBA international break.