The Taipans produced a collective four-quarter performance to subdue Queensland NBL rivals Brisbane 94-85 and claim the 'Sunshine Stoush' in Cairns.

Six players scored double digits in the Snake Pit on Saturday as the Taipans upset the Bullets to record just their third win of the season. 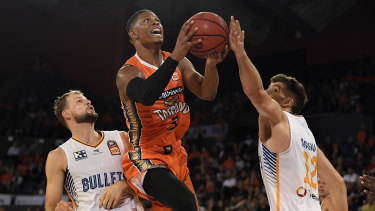 Scott Machado of the Taipans attempts a lay-up against Brisbane Bullets in Cairns on Saturday.Credit:Getty Images

Finals contenders Brisbane were expected to beat Cairns on the road, but they were under pressure throughout.

Down by 10 at the half, the deficit ballooned to 19 at three-quarter time and the Taipans were up by 22 on the home stretch before easing off to cruise to victory.

While Brisbane led the rebound count, it was the Taipans' hustle on the court which proved decisive.

Cairns had eight steals and 18 points from turnovers to underscore their dominance on the floor.

However, star import Lamar Patterson struggled to find his rhythm for most of the night, though he ended up with 17 points after managing just three in the opening half

Brisbane still leads Cairns on the NBL ladder with a 4-5 record, while the Taipans improved to 3-6.