Red-hot Brisbane have strengthened their NBL finals claims after defeating the 36ers 108-99 at the Adelaide Entertainment Centre on Saturday night.

The Bullets led narrowly at the end of three evenly contested quarters before breaking the shackles and blowing the 36ers away in the fourth term, rollicking to their fifth-successive win. 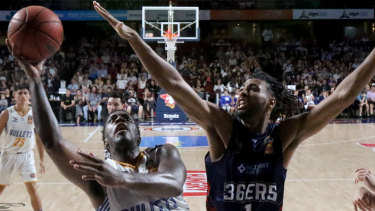 American swingman Lamar Patterson (29 points) top-scored for Brisbane (13-11), while imports Eric Griffin and Jerome Randle were valiant with 21 points apiece for the seventh-placed Sixers (11-13) who needing a miracle to sneak into the top four.

Brisbane's Nathan Sobey was busy early, rattling off 10 first-quarter points against his old side, including a big two-handed slam through the middle.

At the other end, Will Magnay had three rejections, helping Brisbane to a 28-27 quarter-time edge.

Daniel Johnson threw down a vicious dunk on Magnay – the league's best shot blocker – midway through the second, before Brisbane reserve Reuben Te Rangi took over.

Unused in the opening term, Te Rangi rifled seven points without an Adelaide reply inside 50 frantic seconds – to push the visitors clear 46-39.

The 36ers responded immediately with an 11-0 explosion of their own and, after a second quarter of wild momentum swings, Brisbane held sway 53-52.

With ex-Sixer Matt Hodgson dominating the paint and Adelaide becoming ragged in attack, the Bullets moved ahead 64-54 on an 11-0 run of their own.

Griffin sparked another Sixers rally and the home side briefly recaptured the lead before Brisbane, piloted by Patterson and Jason Cadee, regrouped and led 80-77 at three-quarter time.

Big Hodgson fouled out early in the fourth but the Bullets wouldn't be denied. Continuing to shoot efficiently and with more in the tank, Brisbane led by as many as 13 points before cruising across the line.