Australian basketball star Andrew Bogut has described his Golden State Warriors’ game six victory against the Houston Rockets in the NBA western conference semi-finals as one of the best wins he’s been involved with in his 14-year professional career.

Bogut was part of the Warriors’ 2015 championship-winning team, but according to the 2005 No.1 draft pick, to head to the highly rated Rockets’ home court without injured superstar Kevin Durant, as well as DeMarcus Cousins, and close out the series ranked right up there with winning a title. 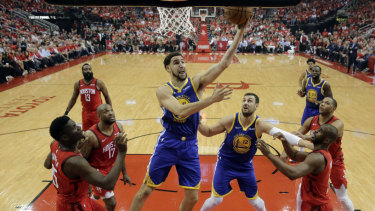 "Going to Houston for game six was a huge win emotionally for us," Bogut told RSN on Tuesday.

"To beat them in six games without Kevin in the last one … it was one of the best wins I’ve been a part of in my career just emotionally and what we had to go through to win it, it was sensational and the feeling in the locker room was unbelievable."

Superstar Steph Curry was pivotal in the win, recovering from a scoreless first half to finish up with 33 points in a spectacular individual turnaround.

Curry hasn’t been particularly productive in these playoffs and has come in for sharp criticism on social media as a result, but Bogut said none of that affected the all-time record holder for three-pointers made in a single season.

"That’s the era we live in. The guy is a two-time MVP, multiple All-Star, he’s won three championships, going for his fourth and then he’s had a couple of bad games in the playoffs and social media comes alight and everyone is killing him," Bogut said.

"That’s just the reality of the world we live in unfortunately – everyone loves to kick a man while he’s down. It’s not different for Steph but he bounces back just like Steph does and gets us over the line.

"His routine remains the same the next day, exactly the same thing, same amount of shots up and you don’t notice a difference. But obviously when his back is against the wall, I wouldn’t like to be the other team, put it that way."

Next up for the Warriors is the best-of-seven western conference finals series against the Portland Trail Blazers, with the winner earning a spot in the NBA finals.

There’s a good chance that Golden State will play the majority of the series without both Durant and Cousins, but Bogut said the team had to accept the reality of the situation and that they would need to find a way to beat Portland without the star duo.

"We’ve adjusted and a team of champions will always adjust and not use an injury or your best player playing bad or whatever it is as an excuse," he said.

"We’ve still got to go out there and perform and we’re confident we can win the series with or without Kevin and that’s kind of the mindset that we have.

"Obviously we would love to have him out there and DeMarcus but the reality is he might not be out there for the first 2-3 games at least."

Game one of the western conference finals series begins at 11am on Wednesday (AEST).