Sydney Kings star Andrew Bogut has agreed to return to the NBA with the Golden State Warriors.

Bogut has received a letter of clearance from his NBL team, paving the way for the veteran Australian centre to rejoin the two-time defending NBA champion Warriors. 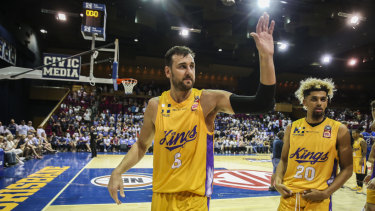 The Athletic reported on Wednesday Bogut and the Warriors are working to finalise a one-year, minimum contract.

Bogut is holding a press conference later on Thursday morning with the Sydney Kings to officially announce his move.

Bogut won an NBA title with the Warriors in 2015 but the team offloaded him to the Dallas Mavericks in 2016 to clear salary cap space to sign All-Star Kevin Durant.

The Warriors' two-time NBA MVP Steph Curry said on Wednesday he was excited at the prospect of having Bogut back in Oakland.

"It's exciting, weird, a blast from the past; all that combined," Curry said.

"Obviously I know they've got a few more steps before it's official but he's a guy that we have a lot of experience with.

"He knows our system. He knows how we do things around here.

"He was instrumental in that turnaround to become a championship-calibre team."

Bogut, who suffered a number of major injuries during his time in the NBA, played every match for the Kings in his first season in the Australian league.

The Warriors are favourites to win their fourth title in five years.

Gilberto Silva admits Arsenal's efforts to replace him are 'painful'