Australian NBA star Ben Simmons says he won't back down from calling out racism, speaking out after an incident at Crown Casino earlier this year.

The Philadelphia 76ers point guard said he and his group were racially profiled after he and a friend were denied entry by security in August, while a white friend was allowed in. Crown denied this and said the group was later allowed entry after their identifications were checked to show they were the right age to enter. 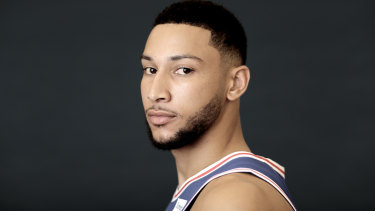 "The first thing that comes to my mind is, 'OK, obviously it's not a random thing. This is you picking us out,'" Simmons told NBA journalist Marc Spears of The Undefeated website.

"It didn't make us feel good. You've probably been in situations where you felt lesser or just made you feel lesser of a person or just not good about yourself. But it wasn't really about me not feeling good about myself. It was me knowing that's not right, and me letting them know it's not right.

"And knowing that there's other people that have definitely experienced the same thing but can't say anything because they don't have the same platform.

"They can say something, but they might not reach as many people. And knowing I was able to do that and bring awareness to the situation, I was happy about it, and I didn't really care what the media was going to say, what people were going to say, because it doesn't matter.

"Everybody should be respected and treated the same way."

Simmons added he saw a mixed reaction in Australia to the incident.

"I'm never going to back down, because I know I wasn't in the wrong. It wasn't a situation where I was making things up. It is what it was. It is what it is," Simmons said.

"And I'm not afraid to let anybody know how I feel about it because I am who I am. At the end of the day, I'm from Australia. I was born there, I was raised. It's where I'm from. And I want that respect, too."

Simmons also said he had other people reach out to him with similar stories of poor treatment both at Crown and other venues in Australia.

"I had many people reach out and tell me they felt the same way and had similar experiences within different places and even the same place," Simmons said.

"But there was also a lot of negativity that came with it. There was a lot of people saying, 'Well, you think you should just be let in because you're this and that'. And it had nothing to do with that."

Spears also asked Simmons about growing up in Australia and the differences in the racism he saw at home and during his time in the United States and the player raised the often ignored issue of casual racism.

"I'd say casual racism is the biggest difference with America and Australia," Simmons said.

"I feel like the racism here [in America], it's either super racist or it's not. I haven't really seen the in-between here. But back home there's a lot of people that's joking around and thinking it's just funny to make fun of people's ethnicity or where they're from and culture, or make themselves feel like they're better than that person. Even if they're saying they're joking and using that casual racism, which sucks, because I'd honestly rather see somebody completely be some way or just not do it at all."

Simmons said childhood lessons from his father meant he would always speak up on the issue, but that he still intends to suit up for the Boomers at next year's Olympics.

"I've had certain situations where I've been called the n-word from other kids at a young age,'' Simmons said.

"And the one thing my dad [American-born NBL star Dave] told me was, 'Never take that from anybody. Never let anybody be racist towards you or make you feel a certain way, because it's not right.

"That's the one thing that's sort of stuck with me."

Simmons says he's encountered similar racism while living in the United States and that the experience hasn't influenced his intention to represent the Boomers at Tokyo 2020.

"If everything goes smoothly and correctly, that's where I want to be," he said.

"I definitely want to represent Australia in the Olympics. It's a dream. And if I'm able to bring a medal and help this team and do something right for the country and bring a positive light to it, I would love to do that.

"[Australia means] everything … I think people get a little twisted and confused because my accent isn't as strong as some words I say that sound Australian.

"I live in America. I wear diamond chains. I don't look like a typical Australian person and I think that's what really irks and annoys people back home. But at the same time, I'm not scared to be who I am."