Which Ben Simmons will show up when the Philadelphia 76ers and Toronto Raptors clash in their do-or-die game seven?

The 22-year-old Australian has alternated between Dr Jekyll and Mr Hyde personalities in the first six games of their NBA second-round playoff series. 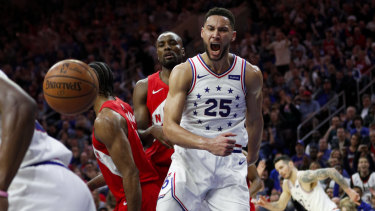 Jekyll and Hyde: Game seven will be crucial for Philadelphia’s Ben Simmons.Credit:AP

Simmons was an unstoppable force in leading the 76ers to a game six 11-point win over the Raptors, but was a villain in the Raptors' 36-point thrashing of the 76ers in game five.

On Monday morning (AEST) the 76ers and Raptors, with the series locked 3-3, will face off in Toronto to decide who will play Giannis Antetokounmpo's top-seeded Milwaukee Bucks in the eastern conference finals.

"Transition" has been a keyword spoken by both teams in the lead-up to the series finale and athletic point guard Simmons is a big part of that.

"The team that normally gets out in transition wins more," said Simmons' 76ers teammate Jimmy Butler.

The Raptors know they need to corral the 208cm tall, Melbourne-born speedster who terrorised them in the open court in game six.

Simmons' height and speed allows him to grab defensive rebounds or steals and sprint down court before opponents can set their defence.

"I think it was just being aggressive downhill," said Simmons, describing the success he had in pushing fast-breaks in the game six win.

"It was playing my game."

The game seven result is expected to have monumental ramifications for both teams and the careers of 76ers coach Brett Brown, his star players Butler, Tobias Harris and JJ Redick and the Raptors' leader Kawhi Leonard.

Butler, Harris and Redick become free agents at the end of the season and will be more likely to flee if the team implodes.

The Raptors' best chance of persuading free agent Leonard to stay in Toronto is to go deep into the playoffs.

If Simmons has a dud game and the 76ers are eliminated there will be calls for Philadelphia to trade him, something team general manager Elton Brand might do if another team offers All-Star calibre players better suited to play alongside centre Joel Embiid.

A strong game seven from Simmons will also prove to doubters he is worth the five-year $A220 million contract extension he will become eligible to sign in July.