Australian centre Aron Baynes has produced another big game as the resurgent Phoenix Suns claimed a 114-105 win over the Memphis Grizzlies.

Baynes scored 20 points, only one less than sharpshooting teammate Devin Booker, as the Suns dominated to improve their season start to four wins and two one-point losses. 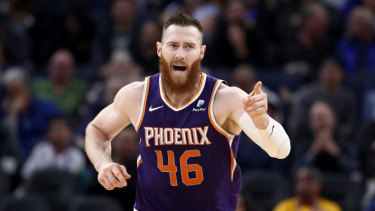 Aron Baynes had another big game after his recent crossing to the Suns.Credit:Getty Images

After arriving from the Boston Celtics in the off-season, the Boomers star is thriving under the added responsibility handed to him after star centre Deandre Ayton copped a 25-game suspension for a doping violation.

He spent 28 minutes on court and topped double figures in scoring for a fifth straight game.

In Detroit, Andre Drummond continued his impressive season start for the Pistons.

Drummond had at least 20 points and 20 rebounds for the third straight game and fourth time in seven games. He added six assists, five blocks and three steals.

In Orlando, Jamal Murray scored 22 points, Nikola Jokic had 20 and seven rebounds and both made late plays to help Denver beat the Magic 91-87.

Shai Gilgeous-Alexander had 23 points and eight rebounds in Oklahoma City as the Thunder turned over New Orleans 115-104.

Dennis Schroder and Darius Bazley each added 17 points and Chris Paul finished with 15 and nine assists. JJ Redick scored 17 points for the Pelicans.