With the world's two most expensive soccer players cheering him on in Paris, Milwaukee Bucks star Giannis Antetokounmpo took a while to get going.

The first NBA regular-season game in France drew some famous faces to the Bercy Arena on Friday, among them Paris Saint-Germain's Brazilian stars Neymar and Thiago Silva plus France's World Cup hero Kylian Mbappe, to watch Antetokounmpo and company go through their paces. 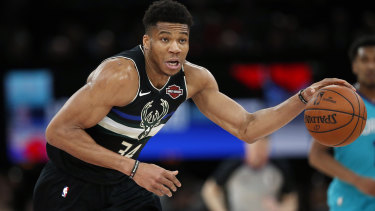 The Greek star found his rhythm late in the game to record 30 points and 12 rebounds to help the NBA-leading Bucks beat the Charlotte Hornets 116-103 for their eighth straight win.

Back Stateside, Kawhi Leonard scored 17 of his game-high 33 points in the crucial third quarter and had his first career triple-double as the Los Angeles Clippers beat the Miami Heat 122-117.

Los Angeles went from down six points to up 15 in the game-changing third quarter. The Clippers had trailed by 15 in the first period.

The Heat, who entered the game with the NBA's best home record at 20-1, were led by Jimmy Butler, who had 20 points, eight rebounds and seven assists before going out with a right-ankle injury in the fourth quarter.

Russell Westbrook scored a season-high 45 points as the Houston Rockets rallied from six behind in the third quarter to beat the Minnesota Timberwolves 131-124.

Kemba Walker racked up 37 points to enable the Boston Celtics to surge past the Orlando Magic 109-98 despite missing stars Jayson Tatum and Jaylen Brown due to injury.

Kyle Lowry scored a game-high 26 points for the Toronto Raptors, who held off a furious fourth-quarter rally by the New York Knicks to earn a 118-112 victory.

Pascal Siakam had 23 points and combined with Lowry to score the final 12 points for the Raptors, who have won six straight.

Australian Thon Maker's depleted Detroit Pistons – missing Blake Griffin, Andre Drummond, Bruce Brown and Tony Snell – were no match for the Memphis Grizzlies, losing 125-112 while Buddy Hield scored 21 points off the bench as the Sacramento Kings snapped a six-game losing streak with a 98-81 win over the Chicago Bulls.

High-profile No.1 overall draft pick Zion Williamson backed up his impressive debut with 15 points and six rebounds but he is yet to experience a win after the New Orleans Pelicans lost 113-106 to the Denver Nuggets.

Danilo Gallinari scored 25 points to lead the Oklahoma City Thunder to a season-high in points in a 140-114 win over the Atlanta Hawks and Devin Booker racked up 35 points as the Phoenix Suns notched a 103-99 victory over the San Antonio Spurs.

The Indiana Pacers compounded the Golden State Warriors' woes with a comprehensive 129-118 triumph.