American basketball fans woke up to the news Australia had inflicted a historic win over the once dominant Team USA and the reaction was swift and savage.

Social media lit up with the Kemba Walker-led US squad described as "trash" and "embarrassing". 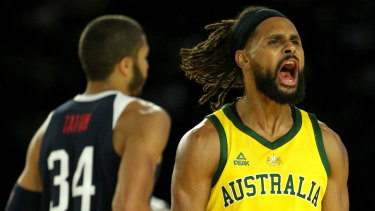 In the zone: Patty Mills celebrates another bomb against Team USA.Credit:AAP

The US and Australia have both been rocked by All-Star and NBA players opting not to play, with the Americans without James Harden, Anthony Davis, Damian Lillard and recent injuries to PJ Tucker and Kyle Kuzma.

Australia are without All-Star Ben Simmons and his Philadelphia 76ers teammate Jonah Bolden.

Impressive performances from Australians Jock Landale, Chris Goulding and Bogut in Melbourne will likely have NBA teams calling their agents.

Bogut joined the Golden State Warriors' playoff run after completing his first season with the Sydney Kings earlier this year and with teams like LeBron James's Los Angeles Lakers in need of centres he could be a hot commodity.

"What I'm impressed with is Australia's movement without the basketball and Andrew Bogut," former NBA player and coach Sam Mitchell, analysing the game in the US for NBA TV, said.

"Not just his passing.

"We know he is a big man who can play big but the things he was doing off the dribble, leading the break, facilitating like that, man this Australian team is going to be tough."

The World Cup starts on Saturday in China.

Australia face Canada on Sunday in their opener and the US take on the Czech Republic.

Athletes watch and wait on coronavirus in Tokyo