The summer of Test cricket kicks off on Wednesday when Australia’s two-match series against the West Indies commences in Perth.

The Windies have been a shadow of their golden era teams of the 1970s, 80s and 90s in the red-ball arena for some time, but there are still plenty of reasons why you should care about their first Test series against Australia in seven years.

Windies on the way back

Despite their disastrous Twenty20 World Cup, which saw the two-time champions fail to qualify for the Super 12 stage after losing to Scotland and Ireland to finish on the bottom of their group, the West Indies actually have a decent Test squad. They head into this series against Australia in excellent form, having beaten England and Bangladesh 1-0 and 2-0 respectively in the Caribbean in March and June.

Captain Kraigg Brathwaite led from the front for the West Indies across those two home series, amassing 491 runs at an average of 70.14, including four fifties and a brilliant 160 in the drawn second Test against England at Bridgetown – his second-highest Test score. Middle-order batsman Jermaine Blackwood was also consistent with the willow across both series, scoring 289 at 41.29, including a century. Wicketkeeper Joshua Da Silva and Nkrumah Bonner also hit tons against England, while all-rounder Kyle Mayers’ most recent knock saw him compile 146 against Bangladesh. And their bowling attack has also been in fine touch this year, especially their pace battery consisting of Alzarri Joseph, Jayden Seales and the evergreen Kemar Roach who combined for 63 wickets against England and Bangladesh. Joseph took 22 scalps at 25.82, Roach snared 21 at 22.57, including a five-wicket haul (5-53) in the first Test against Bangladesh at North Sound, and Seales claimed 20 at 22.15. Mayers was also handy, with his medium-pacers picking up 13 poles at a spectacular 9.77, and he was the only bowler to take a five-for (5-18) during the Botham-Richards Trophy series. How the Aussies cope with this attack that clearly has its tail up will be fascinating. 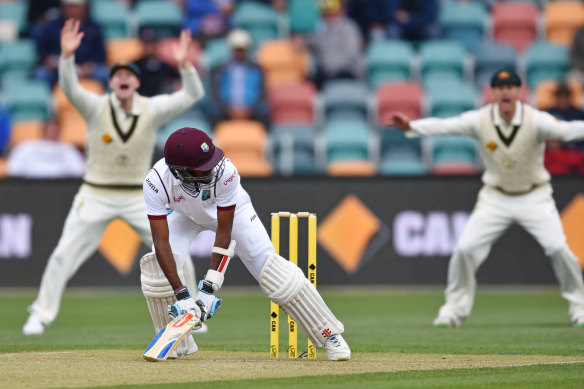 Last time: Kraigg Brathwaite is given out LBW in Hobart in 2015.Credit:Scott Gelston

Test supremacy at stake for Aussies

Australia will want to deal with the threat they pose competently because this series could also have a huge bearing on the World Test Championship. The Australians are on top of the standings and only have three more series left in the league stage against the Windies, South Africa (during the peak summer period) and India, early next year. A strong showing against the West Indies will be critical for Australia, as South Africa and India are second and fourth, respectively. A slip up against the Windies could leave Australia vulnerable against those sides, who would have the potential to unseat the Aussies from the top rungs of the table. The top two teams in the Test championship will face each other in the final at The Oval in London in June.

The Aussies have been in pretty reasonable nick themselves in the past 12 months in the longest form of the game, backing up a 4-0 thumping of England in the Ashes with an historic 1-0 series win over Pakistan on their first tour of the sub-continental country in almost a quarter of a century. However, the euphoria of their Benaud-Qadir Trophy victory was tempered four months later when they had to settle for a 1-1 draw with Sri Lanka, a series that ended with a humiliating innings loss for Australia. The Aussies will be keen to not only make up for that forgettable performance, but also their failure to qualify for the semi-finals in their home Twenty20 World Cup earlier this month. Importantly, a strong showing against the West Indies will provide the ideal springboard for their all-important series against South Africa starting on December 17.

Khawaja in reach of huge milestone

If this calendar year has belonged to any Australian cricketer, it’s Usman Khawaja. In January, the rejuvenated 35-year-old was given another chance after two-and-a-half years out of the Test team, and he took it with both hands. Since returning to the line-up, Khawaja has undergone a spectacular resurgence, hammering 888 runs at 98.66, including four centuries and three fifties, to be one of the most in-form players in world cricket. He needs only another 112 runs to crack the magical 1000-run barrier in a calendar year and already looms as a major thorn in the Windies’ side. The meteoric rise of Cameron Green has also been a treat to witness. The tall all-rounder seems to be getting better with every outing, and with an average of 43.50 with the bat and 35.44 with the ball so far in 2022, his continued development will be a point of great interest, too. 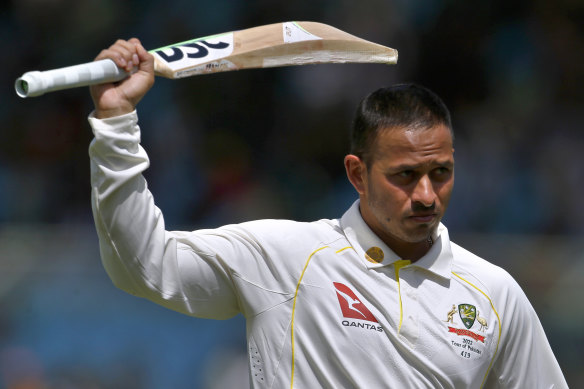 Usman Khawaja celebrates a century in Karachi in March.Credit:AP

Australian opener David Warner has struggled in 2022, scoring just 266 runs at 22.16 in the Test arena, and backing up his man-of-the-tournament heroics in last year’s Twenty20 World Cup with just 44 runs at the 2022 edition. It’s been almost three years since Warner has scored a Test century, and with CA finally opening up the pathway for the 36-year-old to eventually realise his leadership aspirations down the track, he needs a big summer to solidify his spot in the team for the long-term and give himself a chance of perhaps captaining Australia in some form, or at least becoming a vice-captain again. He will be hoping to replicate his recent run spree in one-dayers in the five-day game.