Cricket Tasmania has angrily rejected the network's claims the state government had a financial agreement with Cricket Australia to stage Big Bash League games, describing them as "Trump-like".

A day after an affidavit outlining a series of text messages and emails between Seven and CA came to light, Tasmanian cricket officials are not happy at how the game in the state has been portrayed by the network. 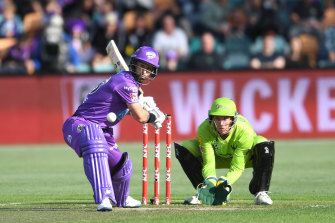 Cricket Tasmania have branded claims made by Seven West Media as “Trump-like”.Credit:Getty

Tasmania is caught in the crossfires of a heated dispute between Seven and CA over the $450 million broadcast contract, which threatens to overshadow the early stages of the international men's season.

Seven believes this is an example of how CA had breached its media right agreement to "use all reasonable endeavours" to "conduct matches maintaining a standard no lower overall than the preceding season's standard".

Seven's Melbourne managing director and head of sport Lewis Martin has also asserted that the revised BBL scheduled will lead to "substantial losses" for the network and negatively impact BBL ratings, brought about by CA accommodating the demands of the Indian board.

CA, however, has said the changes to the schedule were brought about by COVID-19 as seen with its issuing of force majeure notices.

“The Trump-like allegations concerning the Tasmanian State Government are patently absurd and untrue," CT chairman Andrew Gaggin said in a statement on Wednesday.

"The Tasmanian Government has certainly provided an incentive. Its proactive and responsible COVID-19 policies have ensured that Tasmania is one of the world’s safest places and the perfect location to host the start of the Big Bash.

CT has also defended its two major venues, Blundstone Arena in Hobart, and University of Tasmania Stadium in Launceston, after Seven said it would be "commercially irrational" to stage games in "two relatively small and unheralded stadia". The grounds, which CT says are "world class" have capacities of 20,000 and 21,000 respectively.

"Tasmania has long been the grassroots champion of Australian cricket, having provided a host of great players and the current Test captain," Gaggin said.

"It is pleasing that Cricket Australia has acknowledged this and we look forward to an amazing start to the tournament.

"I extend a warm invitation to all Australian cricket lovers to journey down to discover the world class stadiums at Blundstone Arena and UTAS Stadium, and to enjoy all of the other wonders of Tasmania. I can’t wait for the first match on December 10."