Ahmedabad: England all-rounder Ben Stokes found their below-par batting display frustrating but defended the team selection for the fourth and final Test against India in Ahmedabad on Thursday.

England shot themselves in the foot in the previous Test at the same venue when they opted for a four-pronged seam attack on a spin-friendly track and were beaten inside two days. 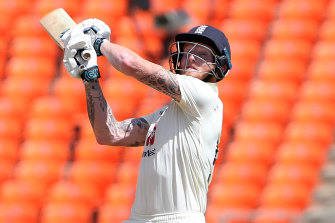 Vice-captain Ben Stokes top-scored for a below-par England in Ahmedabad.Credit:Getty

“I think as the day progressed, you could see that the ball started to spin more, and had more bounce…”

In the previous match, spinners claimed 28 of the 30 wickets that tumbled in five sessions.

In contrast, India quick Mohammed Siraj dismissed a couple of English batsmen, while Anderson claimed the lone Indian wicket to fall on Thursday on a more seamer-friendly pitch at the same venue.

“We’re more than capable of scoring more than 300 on a wicket like that out here, it’s frustrating,” Stokes said.

The England vice-captain top-scored for the tourists with a fighting 55 while Lawrence justified his recall with a fluent 46.

Stokes felt spinners Jack Leach and Bess would play important roles as the pitch deteriorates and also backed the decision to strengthen their batting order.

“Lengthening the batting lineup is something that we’ve taken away from the last Test match, having an extra batter in case we’re faced with similar conditions,” he added.