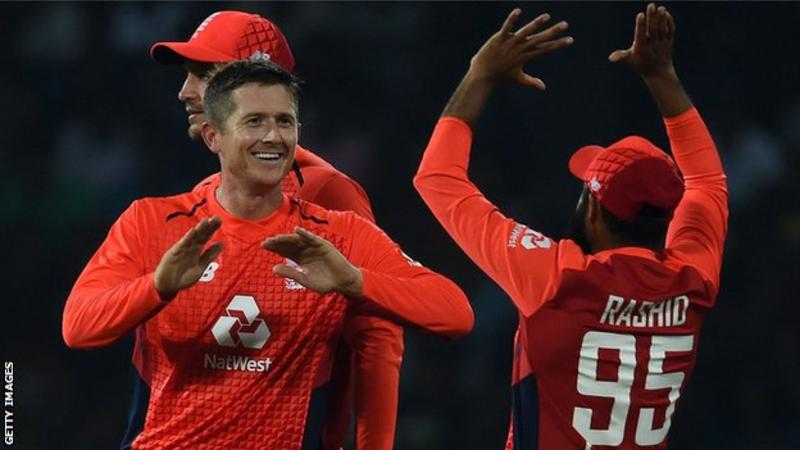 Joe Denly hopes to put himself in contention for a place in the England Test side after starring in the Twenty20 victory over Sri Lanka.

Denly, playing his first international in eight years, took four wickets with his leg-breaks and made 20 with the bat as England won by 30 runs.

“There are a couple of warm-up games, so hopefully I can perform there to put my name in the hat,” said the Kent man.

The first match in the three-Test series begins on 6 November.

Denly has never played a Test but has been included in the England squad on the back of some fine all-round performances for Kent.

The 32-year-old not only gives England an option at the top of the order after the retirement of Alastair Cook, but his bowling could prove useful in a series where spin is expected to play a big part.

“I think being able to bowl will help my case,” said Denly, who played nine one-day internationals and five T20s for England in his previous spell as an international cricketer between 2009 and 2010.

He told BBC Sport: “To get an opportunity to play for England before that Test series can only give me confidence.

“It gives me a bit of an idea to what it means to represent England again. I can’t wait to get going with the red-ball stuff.”

In his time away from the England side, Denly has featured in a number of global T20 leagues, playing for teams from Australia, Pakistan and Bangladesh.

When he first played for England, it was mainly as a batsman, but in Colombo he batted at number seven, then opened the bowling with his leg-breaks.

He took two wickets in his first two overs, then two in the final over of the match to end with 4-19, the best return by an England bowler in T20 internationals.

“I land my leg-spinner pretty well,” he said. “Being mainly a batsman I have a good sense of what the batter will try to do.

“It’s been a while since I’ve been in England colours but I’m delighted to be back and contributing.

“There were a few nerves there, but it was more excitement. I’ve been really looking forward to it.”

England’s success in the one-off T20 follows a 3-1 series win in the one-day series.

The first of their two warm-up games before the Tests begins on Tuesday.