Sophie Devine can add the crown of Women's Big Bash League player of the year to go with the title of being the tournament's best ever six-hitter.

Devine whacked a record 27 sixes this summer to help take the Strikers to the finals – the most in one season ever in either the men's and women's BBL. 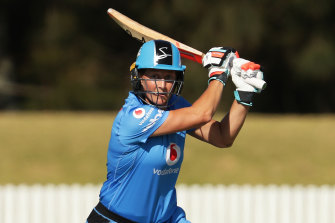 Sophie Devine has had a stellar season for the Strikers.Credit:Getty Images

The Kiwi all-rounder was a clear choice for the prize after a dominant season with bat and ball headed into Saturday's semi-final against Perth and Sunday's decider.

When Ellyse Perry scored 777 runs and took 10 wickets for the Sydney Sixers last year, many questioned if the competition would ever see another run like it.

Devine has almost toppled that in just the next season, headlined by her five sixes in one over against the Melbourne Stars.

"The beauty of this competition is it's quite condensed and when you get on a roll it's easy to stay on a roll," Devine said.

"But the stats and whatever else don't mean much if I don't help this team win a trophy.

"That has always been a goal right from the very start. I want to see this club win championships.

"I can score as many runs or take as many wickets, but if we're not winning titles then what does it really matter?"

Devine was also named as an opener in the WBBL's team of the tournament, where former Australian player and Melbourne Renegades batter Jess Duffin is the captain.

The Renegades have the most players selected, with English star Danni Wyatt and Molly Strano also picked ahead of their semi-final with minor premiers Brisbane.

Meanwhile quick Megan Schutt is the only other Striker picked alongside Devine, as they finished second at the end of the regular season.

But they will go in search of their first finals win in Brisbane this weekend, after finally turning one of the most star-studded rosters into a team producing consistent results.

"When we made the finals a few years ago I think we felt like we were lucky to be in that top four.

"This year we feel like we deserve our place.

"We have played consistently good cricket so we're really excited to take it to the Scorchers first of all and then whoever we play in the final."