Nathan Lyon has revealed he has a new set of plans to counter India's match-winning skipper and is ready to unveil these in the crucial third Test at the SCG this week.

Ajinkya Rahane was more than comfortable being the locum captain through the Melbourne Test, caressing his 12th career century – his 112 only ended thanks to a brilliant run out by Marnus Labuschagne – and propelling the tourists to victory, knotting the battle for the Border-Gavaskar Trophy at 1-1 apiece.

Rahane, who admittedly prospered from dropped catches, will maintain in the top role for the remaining two Tests, with Virat Kohli unavailable, and the Australians know they must find a way to curb him and build pressure on the tourists' middle order. 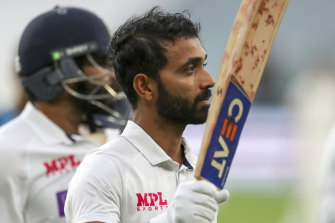 He is the leading run scorer through two Tests (181 at 60.33), his efforts with the bat even of more importance considering Cheteshwar Pujara, the man who stone-walled the home team two years ago, has only 63 runs at 15.75.

"I think Rahane played me extremely well in Melbourne so I know I have already come up with a couple of different plans for him and a few different guys, so I am looking forward to putting them in place," Lyon said on Monday.

"To be honest with you, I think we have been pretty happy with our bowling as a squad. To take 20 wickets quite quickly in Adelaide and then to be challenged a little bit in Melbourne and to stay there and keep creating chances was a positive, so we are very confident as a bowling group."

Rahane's composure is one of his greatest assets, and his ability to avoid any on-field verbal scuffles means he remains focused on the task at hand. He is technically strong on the off side, punishing any deliveries that give him width, and plays with soft hands. He also used his feet well to Lyon, with one drive wide of mid off, which took him to 70 – the Australians had a slip and square short leg in place – particularly memorable. 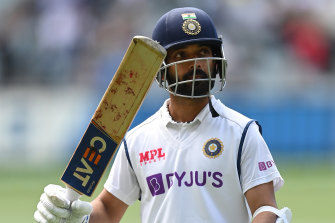 Ajinkya Rahane after being run out on day three of the second Test. Credit:Quinn Rooney

"He is, obviously, a world-class batter which, obviously, helps with everything. I think his patience that he shows out in the crease, he doesn't seem to get flustered too much, he doesn't buy into any sledging or any conversation out there in the middle. He is a pretty calm and collected batter," Lyon said.

"He is standing up [as a leader] at the moment so I know we will have our plans ready to, hopefully, combat him come the SCG Test."

The Indians are set to be bolstered by the return of Rohit Sharma, although the dasher boasts only a modest record against Australia, averaging 31 in five Tests. Despite being one of five Indian cricketers forced into isolation and investigated for a potential COVID-19 bubble breach in Melbourne, Sharma has replaced Pujara as vice-captain for the rest of the series.

"Obviously, Rohit Sharma is one of the best players in the world going around so it's going to be a big challenge for us bowlers but we are not going to shy away from it," Lyon said.

"We love challenging ourselves. He is a big in for the Indian side so it's going to be interesting to see who they leave out. We will have our plans ready for Rohit and, hopefully, we can get on top of him nice and early, but respect him for how good a cricketer Rohit is."

Lyon, two Tests shy of his century, and six wickets short of becoming only the third Australian to 400, has been overshadowed by off-spinning counterpart Ravi Ashwin to date.

On paper, Lyon has had a relatively quiet series claiming four wickets at 36.25, but this doesn't tell the full story. In India's first innings in Adelaide, he dismissed Pujara just as the batting wall appeared set, while in Melbourne his 3-72 off 27.1 overs in the first innings helped to keep the home team in the game after a sub-par batting performance.

However, Ashwin has enjoyed greater returns, claiming 10 wickets at 17.7, and leaving Steve Smith, experiencing a rare slow start to a series, declaring he needed to be more aggressive against the veteran tweaker.

"He has bowled quite a straight line to our batters, which they haven't come up with a plan yet. Fingers crossed they will come up with one and counteract Ashwin's plan," Lyon said.