Home » Сricket » Perry stars but Sixers blown away by Hurricanes

The Sydney Sixers' campaign has hit a mid-season snag after their bowlers fell victim to another Kiwi blitz to slump to their third consecutive defeat on Saturday.

Ellyse Perry led the way for the Sixers with an unbeaten half-century but not enough of her teammates followed her in against the Hobart Hurricanes. 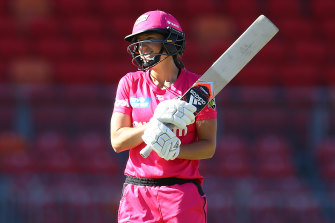 Ellyse Perry hit an unbeaten 72 for the Sixers.Credit:Getty

With Perry yet to rediscover her best with the ball after coming back from injury, the Sixers' attack is lacking the incisiveness against the top-level batters.

Shot down in the last week by New Zealand skipper Sophie Devine and world No.1 batter Beth Mooney, the women in magenta this time could not stop Kiwi wicketkeeper Rachel Priest, whose unbeaten 92 off 63 balls propelled her side to a nine-wicket victory.

The Tasmanian side lacked the killer instinct when they had the Sixers under pressure last week but were dominant this time, winning with 11 balls to spare.

Priest was well supported by West Indies import Hayley Matthews, the pair sharing a 127-run stand for the second wicket. 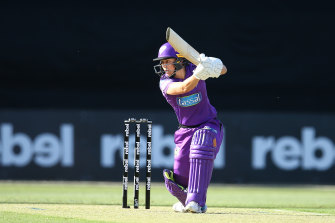 Priest's knock upstaged Perry's 72 off 68 deliveries and while some may be critical of the Australian star's scoring rate she at least played her role at the top as the team's anchor.

The Sixers need Alyssa Healy and Ash Gardner to show the form they regularly display at the highest level.

Yet to hit her straps in WBBL06 after a dominant World Cup, Healy was dismissed for just seven – failing to clear mid-off with a tentative drive to the pace of Brooke Hepburn. This was the type of shot Healy, who is averaging 21, would have little difficulty dispatching to the rope at the top of her game.

"Going in the air without conviction. If you're going in the air in this manner, she could get underneath that but she had to go hard – rocket it over the top," former Test star Michael Slater said in commentary for Seven.

"It was almost like "I'm not quite there, I'll stop on it". It's all right being a strong player in the air when it's your day but you can get yourself in strife far too often if you're not committed to your shot. That's exactly what happened there."

Undaunted by the big stage, 15-year-old Amy Smith again claimed the wickets of national duo Ash Gardner and Erin Burns. The young leggie's control was a feature of her performance but it was a full toss and a ball she dragged down which produced the breakthroughs.

The removal of Burns, for 28 off 18 balls, came at a key juncture as she was threatening to leave her mark on the game.