Glenn Maxwell is in for a $2.5 million pay day and paceman Jhye Richardson has become an overnight millionaire at this year’s Indian Premier League player auction, but former captain Steve Smith must take a $2 million pay cut.

Just weeks after being released from his lucrative contract by Kings XI Punjab, Maxwell’s standing as one of the most sought after Twenty20 players in the game was reaffirmed in Chennai on Thursday night.

But Maxwell’s IPL bonus has come at the expense of his great mate Aaron Finch, who will not be taking part in the world’s best T20 league after failing to attract a bid. 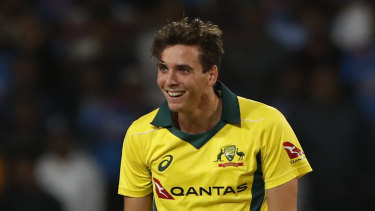 Richardson was bought by Punjab Kings, which fought off keen interest from Royal Challengers Bangalore to secure one of the most promising fast bowlers in Australia.

On the comeback trail from a serious shoulder injury, which dashed his 2019 World Cup and Ashes dreams, Richardson’s express pace through the air is a prized asset on the slower pitches in India.

Franchises were not put off by Maxwell’s lean tournament last year, in which he failed to hit a six, throwing the cash at the dynamic Victorian all-rounder, whose IPL record of 1505 runs at 22 from 82 games is well below his international numbers.

Maxwell can thank two of his former coaches, Andrew McDonald and Stephen Fleming, for his latest IPL bonanza.

The McDonald-coached Rajasthan Royals were involved in an early battle with the Kolkata Knight Riders, but it was the duel between his former Melbourne Stars mentor Stephen Fleming’s Chennai Super Kings and Simon Katich’s Royal Challengers Bangalore that sent his price into seven figures.

The hammer finally dropped on about $2.5 million, sending him to glamour franchise RCB, the IPL home of modern batting greats Virat Kohli and AB de Villiers.

RCB last year released Finch from his $900,000 deal, which freed up space in their salary cap to spend big elsewhere.

Finch had set a relatively modest $177,354 reserve for his services but, after lean tournaments in the IPL and Big Bash League, there were no takers for the world’s No.3-ranked T20 batsman.

Smith will play for Ricky Ponting’s Delhi Capitals, who beat RCB with their bid of 2.2 crore (about $400,000) – well short of the $2.5 million he had been paid by Rajasthan before being dumped last month.

Smith may find it hard to break into a Capitals side, which played in last year’s final, with the franchise indicating it was on the hunt for bench players to improve their depth.

Seamer Nathan Coulter-Nile may be out of favour with Australia’s selectors, but he remains a valued commodity in the IPL, sold for about $885,000 to reigning title holders the Mumbai Indians.