One of the architects of Cricket Australia's controversial Big Bash League law changes has not ruled out further innovations in the quest to make every ball a contest.

Defending the new rules that have been slammed by Shane Watson and Usman Khawaja, cricket free thinker Trent Woodhill refuted claims the moves were "gimmicks" that would complicate the game for new fans. 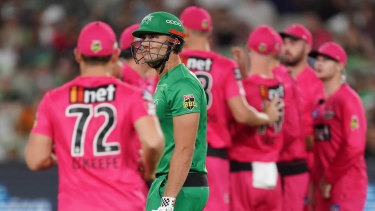 The new rules in the Big Bash League have created much discussion.Credit:AAP

In an attempt to reinvigorate the domestic T20 league amid falling ratings and crowds, CA this week announced three new rules that it says will introduce new strategies to the game and produce more competitive matches.

Teams are now awarded a "bash boost" bonus point for leading at the 10-over mark of an innings. A player, called the X-factor, can be subbed into the match at the midway point of the first innings. And the initial powerplay, when the bowling side can have no more than two fielders outside the circle, has been reduced from six to four overs with the batting side to decide when the second powerplay, called the "power surge", is taken after the 11th over.

Woodhill said the changes would effectively take away what he terms the "lull" from overs seven to 13 as teams will now be either chasing or setting up a bonus point target or, in the case of the batting side, using the power surge to accelerate its scoring.

"The words dull and lull aren't great words," Woodhill, hired by CA to spearhead its acquisition of overseas players and BBL innovation, said. "I think the BBL is about innovation, excitement and change. I'd expect and hope there would be more changes in the future.

"I want to maintain that contest between bowler and bat. This isn't a gimmick to the players or coaches.

"I see how invested the coaches are. It's a sporting contest, they take great pride in the result of their teams and same with the players. It's a pathway to international stardom, not just in world cricket, but franchise cricket."

Woodhill had argued for the batting side to be granted a free hit in the event of a wide, but that idea was knocked back.

In defending the powerplay rule, Woodhill said CA's research found that games were effectively decided at the six-over mark and there was little change in the run rate in overs five and six.

"We're noticing games getting killed off when that happens," Woodhill said.

Woodhill claimed the new rules would not be difficult to understand, saying his 17-year-old nephew and seven-year-old son had already mastered the changes.

At the introduction of the BBL, CA said the revamped city-based league would help the game attract new fans in the hope their interest would transfer to Test cricket. Woodhill said the rule changes in the BBL would not affect CA's strategic vision for the competition.

"It's still targeting young kids who are getting into cricket," he said.

"Our job is to grow that excitement, grow their minds around cricket so that not only are they watching one-day international cricket, they're watching Test cricket – that's really important.

"I come at it from a high performance point of view, where we want a contest every ball, lots of runs, lots of tactical manoeuvres, bowlers to have days out – this stays true to that."

Despite being the president of the players union that approved the moves, Watson was critical of the "gimmicks", questioning why administrators were "trying to reinvent the wheel when the wheel was not broken". Stoinis, however, supported the new ideas.

"I don't think we can afford to get too attached to anything when it comes to T20 cricket and the progression of our sport," Stoinis said. "I'm all for it."