Marnus Labuschagne continued to reinforce his standing as the world’s best batsman with a third successive century and Travis Head delighted the home crowd with his first in Adelaide as Australia dominated the opening day of the second Test against the West Indies.

Fresh from a double century and unbeaten century in Perth last week, the obsessive Labuschagne was 120 not out as Australia reached 3-330 at stumps.

He added 199 with Head (114 not out), who continued his punishing form after a damaging 99 in the first Test. 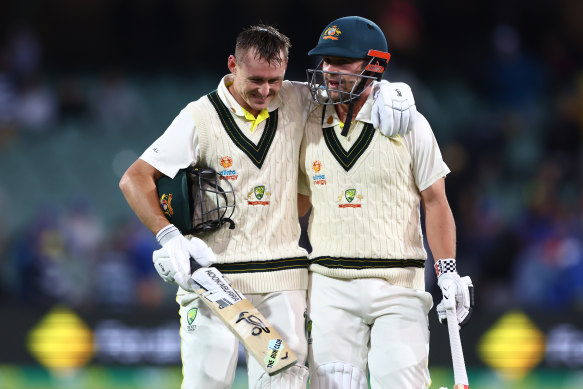 Since his recall at the beginning of last summer, Head has a strike rate of 78 from 11 Tests and 87 from his six Tests in Australia.

Injured captain Pat Cummins referred to Head as the “mayor of Adelaide” and later he delighted the enthusiastic crowd of 24,449 with lovely off-drive to bring up his fifth Test hundred.

Labuschagne, who now has 10 Test centuries, carved himself another significant slice of history, becoming only the third batsman to pass 100 three times in a row against the West Indies, after India’s Sunil Gavaskar and Pakistan’s Mohammad Yousuf.

The continued accumulation by Labuschagne contrasted with Steve Smith, ranked No.2 in the world, who went from a double century to a duck in the space of a week, hitting a return catch to Jason Holder from the eighth ball of a short and unproductive innings. 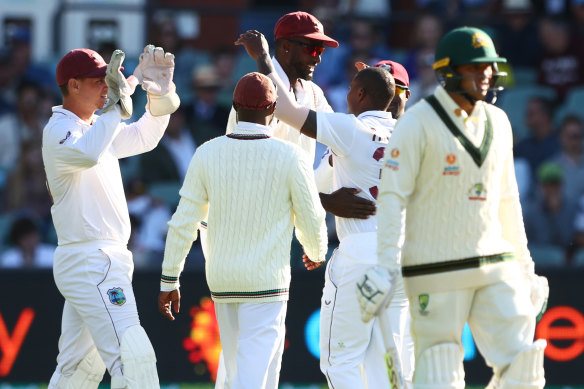 Jason Holder and the West Indies celebrate the wicket of Steve Smith.Credit:Getty Images

The dismissal came shortly after Usman Khawaja was lbw for a well-made 62, taking him past 1000 Test runs during a remarkable comeback year. It was the ninth time he had gone past 50 in nine Tests since his January recall in Sydney.

Smith’s sudden departure was not the only bad news for Australia during the afternoon – it was confirmed that Josh Hazlewood had a side strain that could ruin a second successive summer.

Hazlewood had been a late withdrawal, replaced on the morning of the match by Michael Neser. Cummins was ruled out the previous day with a minor squad strain, allowing Scott Boland to play his fourth Test.

“I was pretty close [to playing],” Cummins told Fox Sports. “I was a bit optimistic. It’s a seven to 10-day injury and it would have been six days.”

It is particularly bad news for Hazlewood, who broke down with a side strain during the opening Ashes Test in Brisbane last summer and missed the remainder of the series.

Cummins claimed that Hazlewood’s injury was “quite different to the one last year”.

It explains why Australia flew two extra bowlers into Adelaide ahead of the Test, Neser and Western Australian tearaway Lance Morris, after the short turnaround from the Perth Test.

The West Indies were also forced to rule out three bowlers from Perth – Kemar Roach, Jayden Seales and Kyle Mayers – because of injury.

That five bowlers were unable to come up following the first Test of a series after a three-day break highlights the downside of increasingly cluttered scheduling. Australia will complete five Tests in 40 days this summer, two against the West Indies and three against South Africa.

It also raises questions about the preparation Australia’s fast bowlers had leading into the Test summer, with three months of white-ball cricket, mostly Twenty20, and no first-class matches to build a foundation.

One of the West Indies’ bowling replacements, Marquino Mindley, arrived in Australia only on Tuesday after a long flight from the Caribbean, which can take up to 30 hours. Mindley walked off the field after just two overs with what appeared to be a right hamstring strain

For a time it appeared that David Warner was about to make a statement on the field as strongly as the one he made off it the previous evening.

Warner’s outrage at the way Cricket Australia had handled the review process around his lifetime captaincy ban appeared to be put into his batting.

It looked as if the genuinely quick Alzarri Joseph would become the victim of Warner’s anger when the brutal left-hander hammered Joseph for three fours in four balls.

But on 21, a wound-up Warner went hard once too often, playing a big square drive to a wide ball, feathering a catch through to wicketkeeper Joshua Da Silva.