Usman Khawaja’s team-first decision gave Ashes rival Travis Head a last-minute opportunity to press his case – and the South Australian could not have made more of his opportunity.

After a lean patch stretching back to mid-October, Head gave selectors plenty to consider by crunching a century after the Redbacks were asked to follow on by Queensland on Thursday.

It may still have come too late to convince George Bailey and his selection panel to give him back the No.5 berth he lost last summer, but Head can at least fly to Queensland for next week’s intra-squad game with confidence. 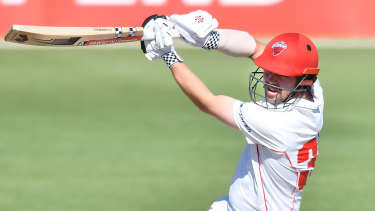 Travis Head slashes a delivery through the off side Karen Rolton Oval on Thursday.Credit:Getty

Khawaja has repeatedly said this season team success overrides any personal honours – and by asking South Australia to bat again he has backed up his actions with word.

Head had started the season with a bang, culminating in a massive 230 in a one-day match, but the runs had since dried up.

In contrast, Khawaja hit a purple patch with back-to-back tons followed by a backs-to-the-wall 70 as selectors finalised their squads.

The latter innings may well be the difference between Khawaja and Head, as it came on a Gabba green top against a rampant Jhye Richardson, whose fast outswing in lively conditions is a taste of what could come in the first Test against England’s pace great James Anderson.

Head had a similar opportunity to show he could prosper on a bowler-friendly deck, but he flopped in the first innings, making just eight in South Australia’s total of 102.

Ten years ago, Michael Hussey revived his fortunes with a last-gasp ton for Western Australia, and Head will be hoping history will repeat here.

Khawaja made just four in the first innings of this game, when conditions were deemed so treacherous for batting that umpires called off play due to concerns with the safety of the pitch.

Bailey indicated last week selectors had all but made up their mind on who would claim the middle-order berth, which seemingly pointed to Khawaja leading in the race to the Gabba.

“We’re starting to get pretty close to where we’re going to land with that,” Bailey said. “They’ve both started the year very well, finished the year [2020-21] off really well; we know both can perform at Test level, positives on both fronts.”