A pressure innings from former Test batsman Joe Burns has saved the Brisbane Heat and condemned the hapless Melbourne Renegades to a loss in Canberra last night. 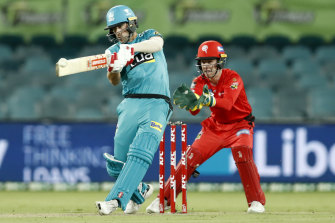 But Burns (31 off 15 balls), who was dropped from the Test side after the Melbourne Test, teamed with Jimmy Peirson to see the Heat to a five-wicket win.

The Renegades looked a chance to pull off a comeback win before Burns arrived but again they paid dearly for their batting woes, making 149 on a difficult Manuka Oval wicket which still required a score above 170 to be competitive.

Renegades star Shaun Marsh may as well have remained with his wife and newborn baby as Xavier Bartlett sent down an unplayable late-swinging ball which trapped the former Australian opener plumb lbw for a golden duck.

Bartlett’s first over was exceptional but he didn’t bowl again and the Heat chose to use an X-factor substitute and replace Bartlett with returning South African star Morne Morkel at the 10-over mark.

Once again regular wickets extinguished any hopes of a big score with Mackenzie Harvey caught out at 2-34 and Sam Harper caught behind soon after.

Renegades captain Aaron Finch had pushed himself down to bat at number four as form and misfortune have crippled his run scoring, once again he made a positive start on 13 off 13 but had Jack Wildermuth appear to hit a crack which made his delivery go low and trap Finch in front as the visitors fell to 4-59.

That sinking feeling must have been setting in for those who follow the Renegades following multiple batting collapses this tournament but young batsmen Jake Fraser-McGurk (40 off 33) and Beau Webster (50 not out off 40) gave their side a chance. Their 58-run union was broken at 5-117 when Fraser-McGurk skied a shot off Mark Steketee (2-24) while soon after Morkel (1-29) took his first wicket snaring Jack Prestwidge for a duck.

But Webster had his way with the Heat in the final two overs taking 26 runs and giving his side a sniff of the win setting Brisbane 150 to win.

The Renegades teamed spinners Imad Wasim and Peter Hatzoglou (2-28) with quick Kane Richardson in the opening few overs and it slowed the Heat for a time.

Bryant hit a lofted drive down the throat of Webster in the deep off Hatzoglou leaving it 1-46 from seven overs.

The Renegades dropped Lynn just before the halfway mark after he skied a Prestwidge ball into the deep. The Heat took the boost point making 72 by the 10th over. Marsh caught Lynn off Prestwidge in the 11th over but Lynn was saved again, this time due to a back-foot no ball.

Richardson bowled Lynn in the 14th over, Prestwidge would redeem himself in his next over to get Lewis Gregory for a duck, two overs later Joe Denley (28 off 24) was caught off Wasim to make it 4-114 with four overs left. Hatzoglou scored an easy wicket when James Bazely charged him and was stumped by Harper but Burns was too good.

MORKEL RETURNS
Heat coach James Hopes praised Morne Morkel for his first effort of the season and his first competitive game since playing with Surrey in August.

The former South African Test bowler took a wicket and showed some decent touch after ankle and hamstring injuries kept him out.

‘‘Xavier is a good young quick and we expect big things from him but it was our opportunity to get Morne into the tournament and give him a go,’’ Hopes told Fox Sports.

“If we weren’t going to start using him in the next few game then we wouldn’t be able to use him for the rest of the tournament. He performed well.”